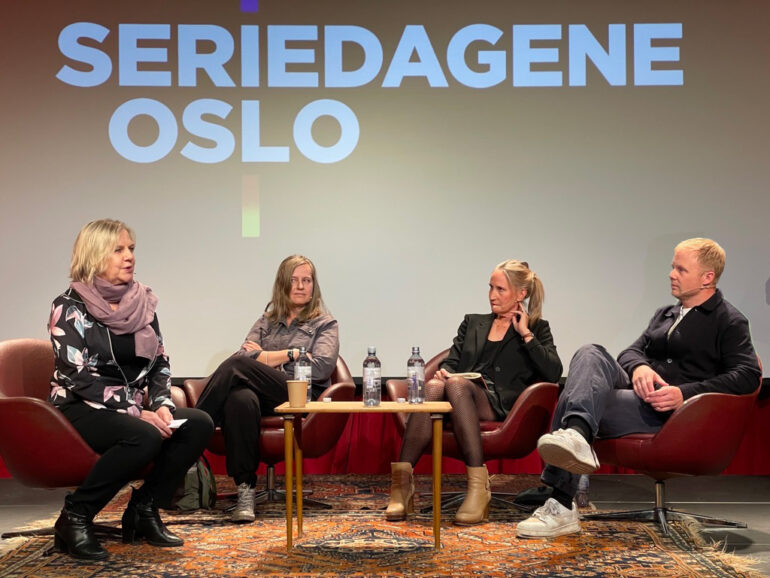 Adam August, Maria Clauss and Margrete Soug Kåset took centre stage at Oslo Series Days to discuss their jobs and the art of screenwriting trouble-shooting at the panel ‘Call My Mentor’.

The three professionals are at the top of their game in their respective territory.

Norway’s Soug Kåset is one of her country’s most experienced TV drama story mentors. She has also worked as script editor and story producer on landmark shows such as Himmelblå, the Emmy-award winning series Mammon II, and Monster among others, and also works as drama consultant for TV2 Norway.

Sweden’s Maria Clauss has worked over the last two decades as script editor and consultant on various Swedish productions such as the films Becoming Astrid, Charter, JJ + E and the series Beartown 2 and Top Dog 2.

Denmark’s Adam August has served as screenwriter on the films Darkland the series Follow the Money season 3 and Cry Wolf. In 2020, he directed his own series for DR, Lover. He is also Creative Executive and Head-Writer at Drive Studios.

Soug Kåset, Clauss and August were in Oslo as key mentors of the new Nordic Script screenwriting lab set up by Nordisk Film & TV Fond, with Soug Kåset acting as senior mentor. After their work - hugely appreciated by the Fund - the trio shared some general advice to a wider audience.

First asked by moderator Liselott Forsman, CEO at Nordisk Film & TV Fond, to clarify the roles of script editors and script mentors or dramaturgs, Soug Kåset said story editors work closely on each project every day in a writer room, whereas dramaturgs come in periodically to support writers. “As a dramaturg, you act a bit like a coach, trying to have fun with the writer while making him/her a world champion,” she said. ”When hired by a producer, your role is to forward the process to get the best out of writers. You are there to ask as many questions as possible.”

Speaking about her own experience Clauss said: “as a script editor you are part of a team when a project is greenlit, whereas as a dramaturg or mentor, you are often hired to evaluate the projects now and then, to try to find new or better directions.“

Just like Soug Kåset, Clauss said that when boarding a project, she always asks a lot of questions: “I often feel like the new kid on the block coming in to other kids’ game. I have to be accepted in their room, in their ‘game’ and figure out how it works. I can’t kill their dolls immediately! But as a newcomer, I push things forward, I am very analytical and figure out the structure, trying to mould the project to understand where the writer(s) want to go.”

Clauss says if someone calls her for a project, it usually means that “something has gone wrong along the way, and they need help. So I figure out what the problem is, to help the writer to find the answers.”

“A dramaturg is a bit like a bridge between a writer and a producer, a translator of a producer who has a gut feeling but not the language of a writer. I sometimes help the writer understand what the producer means,” continues Clauss. 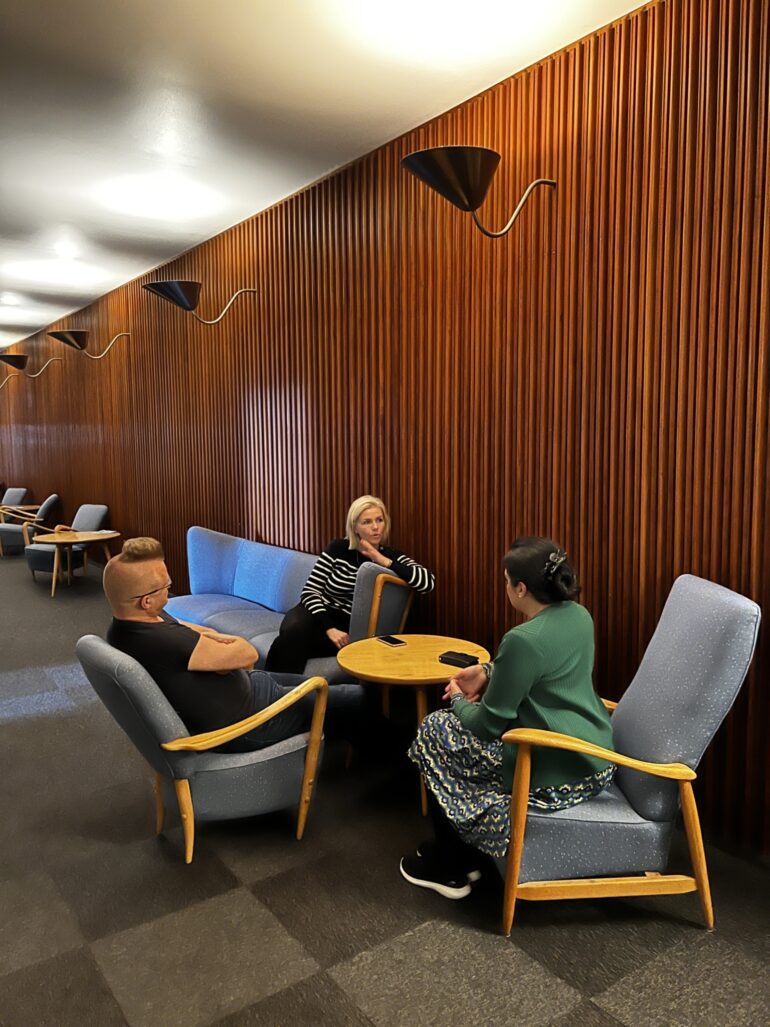 If hired as a script doctor, August says he prefers to ask questions further down in the process, at the 3rd draft. “I don’t focus on what is not working, but on what works to make the project grow and find solutions. It is important when you come in as an outsider, that you quickly try to figure out the creative mood in a writers’ room, to catch the good vibes. Otherwise, you can’t move forward. You want to put together strong teams that can handle a crisis.“

August adds: “Personally I don’t believe in a perfect script but in a good process.”

As a writer, the winner of a Bodil-Best Screenplay award for Darkland says he tends to be hard on himself, but also uses writing consultants on his own material, although his producers are very good at giving notes. “You want people who lift you up and get you excited about the next re-writes,” he observes.

On the delicate relationship between script mentors/script editors with writers, Soug Kåset agrees that feeling the vibe in a room is important as “the energy can change when a new person comes in”. Trust is also quintessential. “If you feel there is mistrust, then it can go very wrong and has to be addressed right away as it tends to grow over time. Talk it through,” she advises.

Clauss for her part mentions honesty and professionalism as key ingredients. “It is important for writers to know that I am honest. I am there to push a project forward with their help. But they also have to be open and professional. It’s the only possible way to behave. And being professional means not being too personal. Most writers are problem solvers, everything is solvable and we are there as their friends.”

Loving a project and its process are other assets for a successful partnership for Clauss, who uses the concept of ‘tough love’ with a writer. 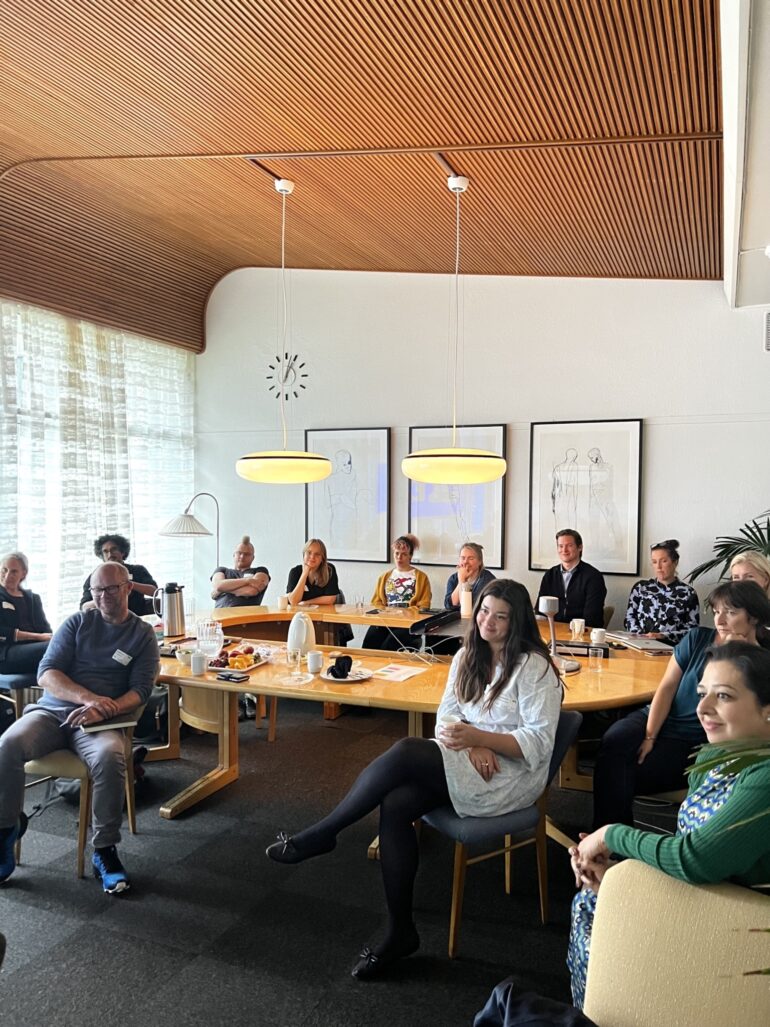 Asked by Forsman to give tips to potential script mentors, editors or commissioners, August said they should be patient. “You have to accept that a script might not be good for a long time and with new writers, you have to go down more roads,” he said.

Soug Kåset’s own advice is for script doctors to “stay curious and open about a project.”

Offering tips as well to writers, August said: “If you have problems with a story, don’t add layers. You should simplify instead and get to the point. Characters, themes are essential. Adding layers doesn’t [necessarily] make it better. “

“Yes keep to the core and stay true to it,” added Clauss.

“My best advice to everyone is: hire a story editor or a script mentor in good time! It can be very tricky for us to come in late on a project to try to fix things,” concluded Clauss.

After the first part of Nordic Script held in Oslo during Oslo Series Days (September 12-14), the second workshop will be held during Göteborg’s TV Drama Vision early February 2023 and the third and final workshop in June 2023 in Helsinki.

Nordic Script has been developed by Nordisk Film & TV Fond, in collaboration with Oslo Seriedagene, the Göteborg Film Festival and the City of Helsinki.