Comedy Queen, Beautiful Beings were crowned at the Festival while SF Studios’ A Man Called Otto, REinvent and TrustNordisk made headlines on the sales side.

The Nordic content wave that has been rolling since last year - impressing festivals and awards seasons - continues, as witnessed by industry and audience responses to films at the 2022 Berlinale.

Making her world premiere at Generation’s KPlus seven years after she won a Crystal Bear for her debut My Skinny Sister, Sweden’s Sanna Lenken was bestowed the Generation sidebar’s award for Best Film for the second time, with the family drama Comedy Queen.

“A great protagonist, powerful and vulnerable at the same time, provided us with her captivatingly told, bittersweet story of loss, grief, anger and healing. This film was a rollercoaster ride full of emotions: sometimes sad, sometimes funny, sometimes embarrassing. The music was always most appropriate and appealing. The camera was occasionally stable, yet also shaky. In a word, the film was superb,” said the Children’s Jury.

The film produced by Rebecka Lafrenz and Anna Anthony for FLX just opened in Sweden via SF Studios to strong reviews.

At the same time, Iceland’s youth drama Beautiful Beings by Guðmundur Arnar Guðmundsson (Read our interview: CLICK HERE) which was well received by critics in Berlin, was voted best film at the Panorama section from arthouse European exhibitors who gave it their Europa Cinemas Label.

“Gudmundsson’s second feature is certainly a harsh look at a bunch of teenage boys struggling to find a way forward despite estrangement from their dysfunctional families. But it is the warmth alongside the violence that makes this a film that demands to be seen,” said the Europa Cinema jury adding that “the themes explored are universal, and this film deserves to find its audience across Europe.” 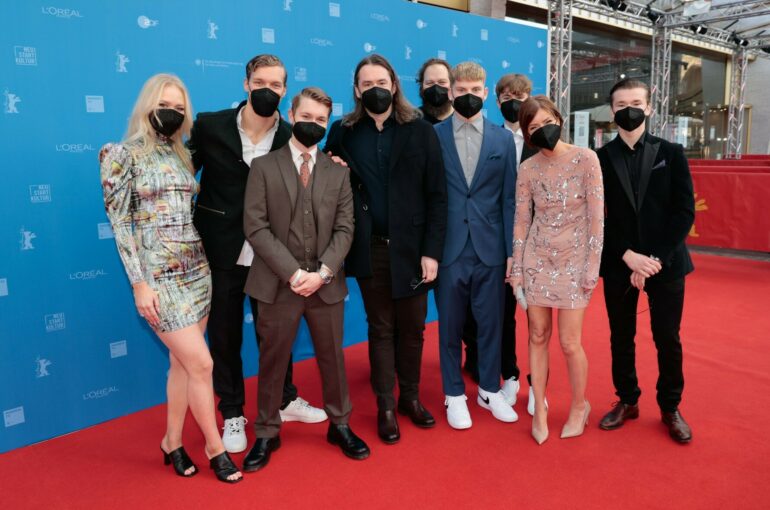 Thanks to the Europa Cinema Label, the film produced by Iceland’s Join Motion Pictures, will benefit from a promotional push in non-national European territories from exhibitors part of the Europa Cinemas network.

Both Beautiful Beings and Comedy Queen were backed by Nordisk Film & TV Fond.

EFM pre-sales record for SF Studios’ A Man Called Otto
On the deal-making side, the biggest announcement at the virtual European Film Market (EFM), and most significant deal ever signed at the Berlinale market according to US trade publication Deadline, was the $60 million pre-sale of the Tom Hanks vehicle A Man Called Otto to Sony Pictures.

The US remake of the Swedish hit A Man Called Ove based on Fredrik Backman’s best-selling novel, was reportedly, the subject of a fierce bidding-war, with Sony gaining the upper hand for worldwide rights.

Filming on the heart-warming film starring Tom Hanks, Mariana Treviño, Rachel Keller and Manuel Garcia-Rulfo, is due to start this month on location in Pittsburgh, Pennsylvania, US. 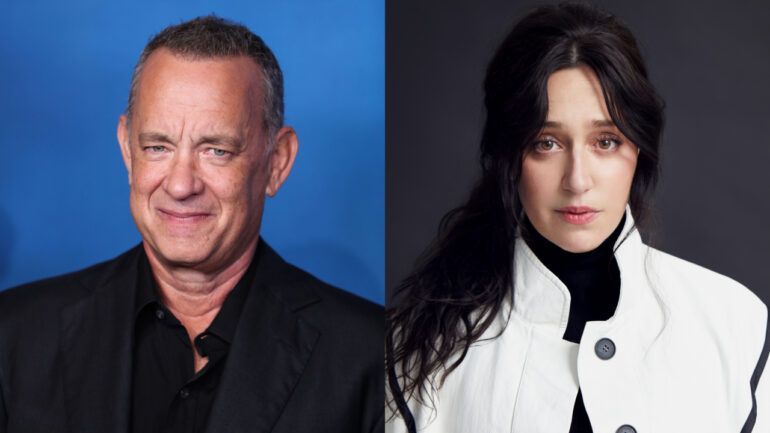 Speaking to nordicfilmandtvnews.com, Fredrik Wikström Nicastro underlined that the film was financed out of Sweden by SF Studios: “It has taken five years to put the project together and ultimately we had Tom Hanks passionately committed, a touching script with relevance and meaning that make you both laugh and cry with an exceptional director in Marc Forster. We knew we had something unique and hoped that buyers would agree.“

“The bidding war and the ultimate deal we closed with Sony was of course a huge relief and now means we have a wide theatrical global distribution from one of Hollywood's best distributors. I am very grateful for the boldness SF Studios and [CEO] Michael Porseryd have shown in making the film in this unique way. It couldn't be better start of the shoot, as cameras start rolling next week here in Pittsburgh.”

Nordic Film deals
A Man Called Otto was among the rare high-end commercial offerings with star power at the EFM, but the indie market with strong auteur quality marquee and packaging abounded.

Among the Berlinale competition films, the French relationship drama Fire by Claire Denis, recipient of the Silver Bear for Best Director, was sold to 30 territories including TriArt for the Nordics, while the US women’s rights period drama Call Jane starring Elizabeth Banks and Sigourney Weaver, was sold by Protagonist to several territories including Mis.Label for Scandinavia.

Although the EFM was held fully online, several sales agents and buyers met on-site at various Berlin hotels and venues.

“We had a very busy Berlin with a lot of meetings all together - obviously, most of them online, but also physical [with buyers] coming from Spain, France, Germany, Eastern Europe and even Australia,” told TrustNordisk’s Executive Sales Manager Nicolai Korsgaard to www.nordicfilmandtvnews.com.

Commenting on global buyers’ attitude, Korsgaard said even the pre-sales market was alive and kicking and TrustNordisk closed a string of deals solely based on their 25-minute promo-reel for 2022, although it was too early at press time to make specific announcements. “In this slate, I would say we had an overweight in a positive way of quality auteur films, and we are excited to see which festival launches they will get this year,” he added.

Helene Aurø, REinvent International Sales’ Sales and Marketing Director reported similar brisk business. “We’ve had a very very busy online market and some meetings in person in Berlin. We think the buyers are getting very active and we have several offers for some films in the same territories,” said Aurø who was still negotiating deals on the Crystal Bear winner Comedy Queen, and on upcoming genre and character-driven dramas for pre-sales.

LevelK’s Head of Sales Debra Liang who was on-site in Berlin, while attending parallel online EFM meetings, felt there were more industry people than anticipated in Berlin. “We found that buyers are still hungry for the content that works directly for their territory even if they do have a fairly full schedule for the rest of the year,” she said. The sales executive said LevelK’s two Berlinale Generation films Girl Picture by Finland’s Alli Haapasalo and Dutch animation film Oink were well received, and buyers were “quick to come back with offers and/or comments from their territories.”

Here under are selected deals announced by Screendaily, Variety and Deadline and directly by the sales agents during the EFM:

REinvent International Sales
The Emigrants by Erik Poppe was sold to Nent Group’s streamer Viaplay for the US, making it an attractive addition to the high-quality Nordic features available on the newly launch US platform. Other recent sales on the Swedish period drama produced by SF Studios include Hungary (Vertigo), Yugoslavia (MCF Megacom), and Czech Republic and Slovakia (Film Europe).

Margrete-Queen of the North directed by Charlotte Sieling for Denmark’s Nimbus Film, was sold to the UK (Signature), France (Swift Productions), Italy (Koch Films) and Russia (Paradise Film Distribution Company). Earlier deals were closed notably with Splendid for Germany and Samuel Goldwyn for the US.

Omerta 6/12, the Finnish actioner directed by Aku Louhimies was sold to Samuel Goldwyn for the US and France’s Swift Distribution, on top of earlier deals sealed with Spain (A Contracorriente), the Baltics (Estin Films) and German speaking territories (Splendid).

Meanwhile the Swedish TV series The Dark Heart which world premiered at Sundance’s Indie Episodic Programme was snapped by VRT for Belgium and NPB for The Netherlands. Gustav Möller’s thriller commissioned by Discovery + will next screen at Series’ Mania’ International Panorama Competition slot.

REinvent also announced the new Norwegian feature film pick up Leave. Directed by newcomer Alex Herron from a screenplay by Thomas Moldestad (Cold Prey, Escape), the chiller follows a daughter’s search for her mother who abandoned her at a cemetery as an infant. In the starring roles are Alicia von Rittberg (Fury), Ellen Dorrit Petersen (The Innocents) and Herman Tømmeraas (Ragnarok). The film is produced by Dave Spilde and Ilana Pinker-Spilde for Trollbound Entertainment with Tommy Wirkola and SF Studios as co-producers. The Norwegian release is set for October 2022.

TrustNordisk Deals:
Speak no Evil by Christian Tafdrup which world premiered at Sundance was acquired by Swift Distribution for France, on top of earlier deals concluded with AMC Networks’ genre streaming label Shudder for the US, the UK and Ireland among others. The Danish thriller produced by Profile Pictures opens March 17 in Denmark. 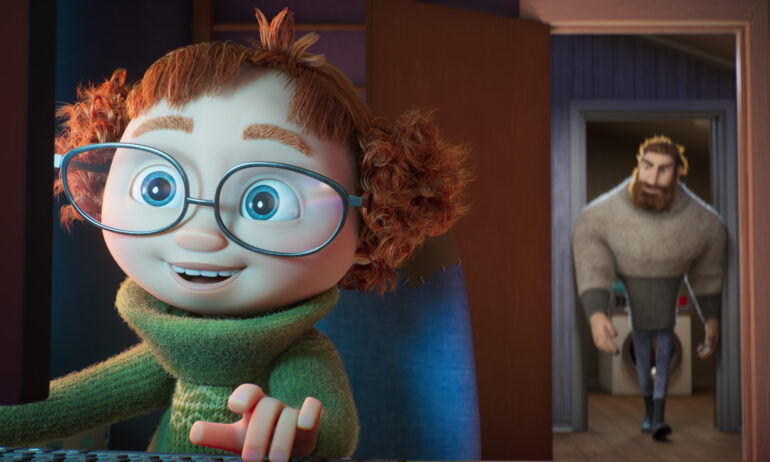 Nothing to Laugh About by Petter Næss was sold to Switzerland (Ascot Elite), Estonia (Estin Film), the Czech Republic and Slovakia (Pilot Film). The Norwegian dramedy was released in Norwegian cinemas last September.

Attachment, by first-time writer/director Gabriel Bier Gislason - Susanner Bier’s son -,was snapped by US streamer Shudder for North America, UK, Ireland, Australia and New Zealand. The English and Danish language horror romance tells of a Danish actress who falls in love with Leah, a young Jewish academic from London. The stellar cast takes in Sofia Gråbøl, Josephine Park, Ellie Kendrick and David Dencik. The Danish release via Nordisk Film is set for April 21, 2022.