The crises that shake societies do not arise by themselves, but are invariably the result of individual people's mistakes and choices - opportunism, lust for power and tendency of human error not to learn from mistakes.

Creator/writer/director Matti Kinnunen is nominated for the series The Invincibles, produced by Moskito TV for Elisa Viihde.

The Finnish political drama thriller is among five series competing for the Nordisk Film & TV Fond Prize-Best Screenplay of a Nordic drama series.

The winner (s) will be announced on February 1st, at a ceremony during Göteborg’s TV Drama Vision.

This is the second nomination for Kinnunen, who competed for the coveted Nordic writing award with the refugee drama Cargo in 2021.

The 8x45’ series The Invincibles co-written with Mikko Reitala (Laugh or Die, Blind Donna) is a character-driven drama, inspired by the real banking crisis in Finland of the late 1980s that had long-lasting effects on the country’s economy and society.

The story combines fictitious characters with real people, such as the financial-wiz Christopher Wegelius who was then involved in the collapse of SKOP bank, but ultimately cleared by the Finnish Supreme Court in 2000.

The story follows the young idealist economist Salla Nurminen (Amanda Pilke) from the Bank Inspectorate, who vows to fight corrupt bankers. She becomes supervisor of the central savings bank SKOP, run by the charismatic CEO Christopher Wegelius (Pekka Strang). SKOP is where young invincible lions can build fortunes, by speculating through a ‘strike and cash in’ approach. Soon Salla enters a cat and mouse game with Wegelius.

This is your second nomination for the NFTF Prize, and after Cargo, a suspense refugee drama with a woman as central character, you bring to the forefront another female-led drama inspired by real events, although in a total different genre: the Finnish financial crisis of the late 1980s. What motivated you to bring that particular story to the screens?
Matti Kinnunen: The proposal came from a production company. I was delighted that we quickly found a common vision to use a fictional main character. It gave me an opportunity to approach a big and challenging topic from an individual's point of view, like in Cargo, but also provided a way to bring in some personal material. A woman as a main character was a natural choice. 80s and 90s was still so male-dominated in economics and politics that it felt necessary to find some freshness in the story.

In what way did you feel this very Finnish story - set in the late 1980s - resonates with today’s audiences, both in Finland and internationally? And would you say that somehow the present times with Covid, then war in Ukraine, are making your story of the effects of microeconomics on society and individuals more relevant than ever?
MK: The crises that shake societies do not arise by themselves, but are invariably the result of individual people's mistakes and choices - opportunism, lust for power and tendency of human error not to learn from mistakes. Some of us are guilty, but are we all responsible? This question also applies to the events described by The Invincibles, so at least in that sense I would see that the topic is very current.

In the 1990s, you were a student in economics-what vision did you have of the tumultuous times in Finland and on the true character Christopher Wegelius in particular?
MK: I remember a large hall in our school, full of small tables with computer screens on them - quite a new thing at the time - and students packed in front of them, instead of lectures, staring at the stock exchange rates. Wegelius was one of those who gave the era a face. He was a young and handsome banker but also known as an Olympic-level steeplechase rider. And just a moment later, the most hated man in the country, a spittoon receiving death threats, and sued by the Finnish state demanding billions for the damage he allegedly caused.

Ultimately, what is the core of the series?
MK: Idealism versus opportunism. The protagonist Salla represents the former, Wegelius the latter. The key phrase is heard from Wegelius at the beginning of the series: "A person can only want one out of the three - money, glory or power". Salla's answer to this is given in the last episode: ”I guess one can want other things, too. Friendship, someone to trust, love, but who are those available for in this world?”

Let’s look more closely at your writing process. Firstly, how did you collaborate with your co-writer Mikko Reitala?
MK: We had a cramped and poorly ventilated workroom, which pushed us to be efficient. I think our way of working was a typical one: we brainstormed together the storylines, shared the scenes to be written, and then I did the final editing. I can’t imagine any documentary made of us that would leave viewers breathless. The biggest arguments we had were about where to have lunch!

How was your research process to give flesh to this sensitive topic? Did you meet many of the real people and key protagonists?
MK: Much has been written about the era. The essential thing was to delimit the subject somehow. The diary that Wegelius kept from those years was a great help. It provided a very eye-opening and touching view to his journey, and in a way changed, my image of him. I also met him in person. He turns 80 next year and still keeps track of his time. It was quite a shaking and memorable encounter.

What were the biggest challenges in the writing process? Making financial jargon and techniques easily comprehensible to the general audience? Mixing real and fictitious characters? Giving a contemporary feel to the period drama? Anything else?
MK: Combining real-life people and events with fiction was rewarding, but emotionally hard. I often found myself wondering about my justification. I thought a lot about how to approach the subject and how far I can go with fictional material. I tried to make sure that the people and the world wouldn’t be black and white. The recession of the 90s was deafeningly painful. The facts and statistics regarding bankruptcies, family tragedies, unemployment rates and suicides are grim reading. In telling and showing all this in such a way that the audience can endure 8 episodes, and that there is also a glimmer of joy and hope, I found permission given to myself to use fiction very helpful.

Could you detail how you developed Salla’s complex character - as she is both a saviour and a villain - having uncovered the illegal activities of SKOP but also partly triggered the country’s financial collapse?
MK: It doesn’t probably sound too appealing that the main character ́s profession is a bank inspector. However, in this case it was a functional and simple way to enter the world. The key idea to Salla's person was to make her the complete opposite of Wegelius. The tension between the two arises when they discover that they have a common enemy and start to need each other, both asking in their minds: "Do you trust me, can I trust you?" Salla is good at her job but also wide-eyed, and therefore drifts into a grey zone, to find herself in a situation where her choices and actions begin to affect her own loved ones.

How was the casting process? Was it clear from script stage that you would hire Amanda Pilke and Pekka Strang in the title roles?
MK: Not from script stage, but Amanda surely got attached to the role during the auditions. For the part of Wegelius, we auditioned about a dozen candidates, but not Pekka for some reason. We later met with him and Amanda and they did one scene together. Then we talked about everything under heaven and earth, and in the end were all convinced that we would go on with this line-up. 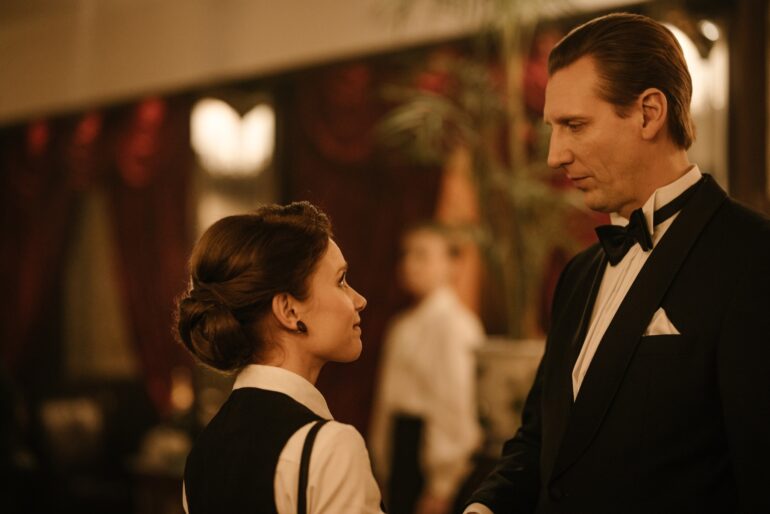 Could you discuss your rhythm, which is well-paced, unlike the frantic rhythm of landmark films about financial crashes such as The Big Short, or The Wolf of Wall Street?
MK: The series depicts ordinary people in an extraordinary era. The aesthetics and atmosphere follow the protagonist's experience of the world in which she lives. During the writing and filming, we did talk about the mentioned works, but for example, in terms of rhythm, one of the key references was Mad Men.

How was the filming? Where and for how long did you shoot the series, and how did you collaborate with your heads of department to re-create the 80s-90s?
MK: The story was planted in Helsinki with less than a week of exterior shooting, covering the key locations such as the Bank of Finland. Then we moved to Tallinn, where we had about five shooting days with an excellent and enthusiastic Estonian crew. I have a simple motto when it comes to period stories that I’d rather avoid nostalgia and laughing at the phenomena and aesthetics.

How was your collaboration with your producer Mari Kinnunen and Elisa Viihde?
MK: The same last name with Mari obliges us to organically cooperate and be soulmates! We are not related, nor are we married, as is always assumed. We met through this project. But The Invincibles has been a very balanced and pleasant journey overall, from the very beginning. I like it when the writing process can be carried out in a constructive atmosphere of trust. The same goes for production. I love peace around me and here it was.

What’s next for you?
MK: I'm about to start directing the second season of Helsinki Crimes, produced by ITV Finland and commissioned by C More.

Could you cite two of the best shows you've watched in 2022?
MK: Sherwood was amazing. I watched it twice!”​