Karin Arrhenius and Maren Louise Käehne, co-writers of SVT’s event series Blackwater based on Kerstin Ekman’s acclaimed crime novel, open up about their craft and collaboration.

The six-part series directed by Mikael Marcimain (Call Girl, The Hunt for a Killer), just premiered on SVT Play January 13.

Trained at the National Film School of Denmark, the Danish-born Käehne was attached to the cult series Borgen, The Bridge, the films Shelley, Long Story Short and Sundance Audience winner Queen of Hearts.

Blackwater kickstarts on a Midsummer’s night in 1973, when two tourists are found murdered in a tent, far up in the mountains of Northern Sweden, near the small town of Blackwater. The incident intersects the lives of three random people, intertwining their destinies for better and for worse. And after years of repression, it is brought back to life, interfering with the lives they now lead.

What does it mean for you to be nominated for the Nordisk Film & TV Fond Prize?
Karin Arrhenius: It means a lot. It makes you feel happy and proud and appreciated. That’s nice.

Maren Louise Käehne: So very few prizes are reserved for screenwriters so it means a lot that Göteborg Film Festival celebrates our craft with this award that honours the hours, months, years of hard work in the storyline room that goes into the making of a series.

How and why did you get into screenwriting?
KA: After travelling around and working with this and that, I studied Literature and History of Ideas, always photographing a lot and watching so many films, which led me onto Film studies and then Biskops Arnös Writers’ School. I was more and more into film and I ended up studying screenwriting at Stockholm University of the Arts.

MLK: I studied English literature in my 20s, and moved to New York to do a masters in film at Columbia University. I took a screenwriting class with a tough and grand old lady who used to write for John Ford, and she convinced me I had a talent for the craft before I realised it myself. So I left Columbia and went back to Denmark to study screenwriting at The National Film School of Denmark.

MLK: Creating layered and fully fleshed characters is such a different task when working in adapted material. With original content, you build the characters from the ground up, you know everything there is to know about them and you develop the plot in accordance with the characters. With adapted material, you inherit the characters as they are on the page and then you have to invent a psychology, a back-story, a personality, that makes sense - and fits the plot. So adapting from literature can sometimes feel like solving a riddle. 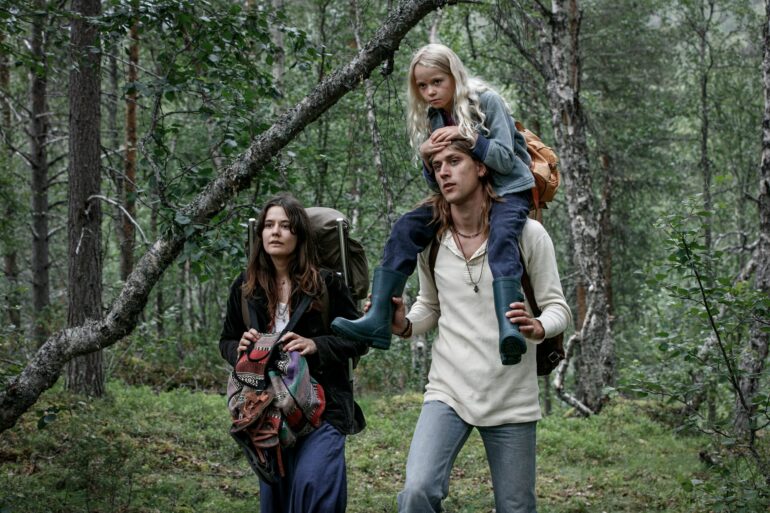 How and when did you get involved in Blackwater? Had you read Kerstin Ekman's novel and what was your first reaction when you were offered the chance to work on such an iconic screen adaptation?
MLK: I read Kerstin Ekman’s novel back in the 1990s and always found it had a cinematic quality that would make for a great film or series. However, it wasn’t until 2017 that I picked up the book and approached Anna Croneman at SVT with the idea to adapt it into a 6-part series. Piv Bernth had just founded Apple Tree and came onboard as producer, and in collaboration we managed to secure the rights from Kerstin Ekman and develop the series to a greenlight with SVT.

KA: I had read this iconic novel and it had always seemed like a dream project. When it unexpectedly landed in my lap to take over together with director Mikael Marcimain, I was happy and grateful.

Blackwater is a Swedish classic and for me it’s also special since I have an old house and spend a lot of time in Jämtland in the north of Sweden where Kerstin Ekman used to live and where the story takes place. So I feel a strong connection to the story.

How did you share the writing process and in what way do you feel you complemented each other?
MLK: We didn’t really share it, to be honest. Karin and I hardly knew each other so it has been quite a different writing experience from what both of us are used to. Pernilla August was originally attached to direct, but when Covid postponed production for a year and collided with another series I had already signed on to do, and unexpected events prevented Pernilla from staying on as director, the project was passed on to Karin and Mikael [Marcimain]. So the final scripts and vision for the series is the result of a close collaboration between Karin and Mikael.

Could you detail the various challenges of adapting Kerstin Ekman's 450-page best-selling novel into a six-part series - from dealing with the time jumps, multi-characters and points of view, while remaining true to the atmospheric crime narration, at the essence of Ekman's own craft as storyteller?
KA: Yes it’s a challenge to deal with all of these aspects. It’s quite a complicated story and there is a risk that it gets stuffed, fragmented and confusing. So you could easily cut out a lot. But I think we wanted to let as much as possible stay on and trust that it works.

It’s a story about a community, so we need the community’s spectrum of characters and their POV’s, their longings, fears and misunderstandings that are crucial to the story. It’s a story about time and what time does to us, about life that passes, so we have to give space to time. Just as the setting and the atmosphere are tightly intertwined and connected to the crime plot, so it has to be given its space. Without the above, the crime story would not be very interesting either. I hope we have found a good structure and grip on all of it.

But to be honest, after completing a script, you don’t really remember or understand what happened and exactly what you did. You are so into it when you do it. And then you are out on the other side. And when the result of your writing comes on screen, you as a writer are already several other scripts ahead.

Could you discuss the various underlying themes, beyond the crime plot (family blood ties, nature threatened by industrialisation, bigotry in a small community etc) and which one you enjoyed most developing for the screens?
KA: The theme of nature is present and strong in Blackwater and through all of Kerstin Ekman’s writing, both fiction and essays (not the least in her latest novel ‘The Wolf Run’, please read!). The elements around us, the plants, the animals, all that lives on earth. Maybe there is a conception that Sweden is a country with lots of fairy-tale forests, but we have had huge de-forestation with old forests being logged down without any consideration for biodiversity and the life in them. There is a great number of trees, but tree plantations are not forests. It's quite a tragic destruction and this seeps through Ekman’s writing, a criticism of the human efficiency and treating and arranging the environment in favour of our comforts and needs. How we put ourselves above nature, and how stupid to think we can benefit from this in the long run.

In Blackwater, it’s an important but not an intrusive part of the story, intertwined with the plot. In the story’s 1973 timeline, we see this clearly exposed through some characters protests.

Above all, it’s of course about the love of nature and the life that surrounds us. But human life can be small, confronted with nature’s powers. Just look at Annie and Mia who get lost in the forest in the start. Nature can be beautiful and comforting and just as quickly turn into something dangerous and threatening.

The themes of family and blood ties are important. What we do to protect each other, and how this can evolve in a small community that can easily grow suspicious. How the murders are somewhat a consequence of misunderstandings, suspicion, silence and shame. It would not have had to happen! It’s like a Greek tragedy. The emotional and psychological impact when people involuntarily break each other down. It just spins and grows, leading to even worse and darker things. 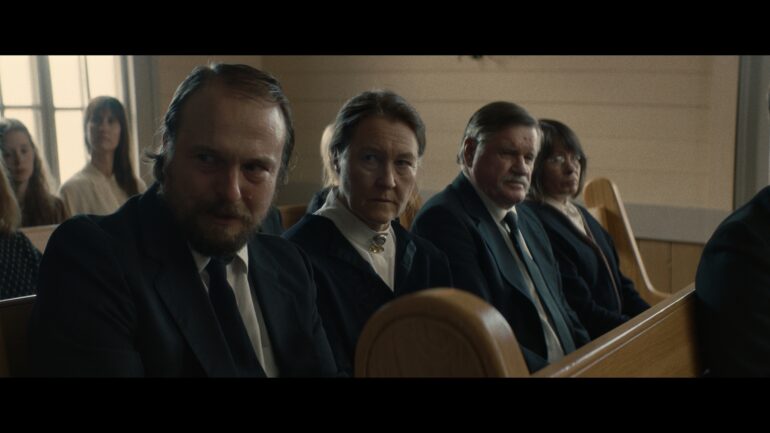 How was your collaboration with seasoned director Mikael Marcimain?
KA: We worked very well together in an intense and energetic process. I think we have an overall understanding of each other, but also with the right amount of fights, just on the right level to keep focus and energy up. That’s good. We have worked together before, and know we work well. It’s been good.

Has Kerstin Ekman seen the show? if so how does she feel about it?
MLK: She has seen it, yes, and she is very happy with it. Kerstin has rejected several offers to adapt the novel over the years, so being the ones who finally got the chance to do it I think we have all been a bit anxious about how she would like the result. So we’re very happy she is pleased with the outcome.

KA: Yes, she opened a bottle of champagne!

What's next for you?
KA: I am adapting Karin Smirnoff’s novel ‘Jag for ner till bror’, as well as two other projects, both adaptations.

MLK: I am adapting Danish author Tove Ditlevsen’s memoir ‘Dependency’ as a 4-part series for Danish broadcaster TV2 with my long-time creative partner, director May el-Toukhy, set
for production later this year.

Could you cite two of the best shows you've watched in 2022?
KA: I haven’t seen much but I saw White Lotus. Over and over again, I watched the sequence in the end where the character Tanya is on the yacht realising what is about to happen - only that sequence is worth the whole series.

I also “re-watched” Friends with my daughter who wanted to see it. And I loved it again, just like many years ago.

MLK: I don’t get to watch a lot of series to be honest, but I devoured The Bear on Hulu and finally got around to watching Annie Weisman’s Physical on Apple+ which I really enjoyed.