We speak to Swedish documentary filmmaker ahead of the CPH:DOX world premiere.

The Raft features the Acali Experiment of 1973 in which five men and six women went on a dramatic raft expedition across the Atlantic Ocean for 101 days, to contribute to Mexican anthropologist Santiago Genovés’ study of human aggression and sexuality. The film produced by Fasad, combines exclusive footage from the expedition and interviews with some of the surviving participants, reunited in a studio where they board a stylized reconstruction of the raft, built by production designer Simone Grau Roney (Melancholia).

What was the genesis of The Raft? When did you first hear of the Acali experiment and decide to make a film about it?
Marcus Lindeen: After I had completed The Regretters, my first documentary film with two characters filmed in a studio, I decided to direct another studio-set documentary and see how I could expand that method. My idea was to create a sort of reunion. I started to look for various groups who could be reunited, including people in the 70s who were involved in radical activities that would have impacted their lives.

By chance, I read a German scientific book about the 100 strangest scientific experiments of all time, and one of them was called ‘The sex raft’, about the Acali experiment. I started digging into the subject and found out that the captain of the raft was a female Swedish captain, which intrigued me even more. I quickly realised it was a fabulous adventure story, involving a group of people from different countries, genders, religions. The initiator of the project was a visionary and somewhat romantic anthropologist [Mexican Santiago Genovés], who wanted to understand what goes on in people’s minds by reuniting a group of strangers on a raft expedition across the Atlantic.

When did you start the project? Was Santiago Genovés still alive?
ML: Yes. When I started researching in the summer 2013, Santiago was still alive and died only a few weeks later. His son very generously invited me to come to Mexico to go through his father’s archives. 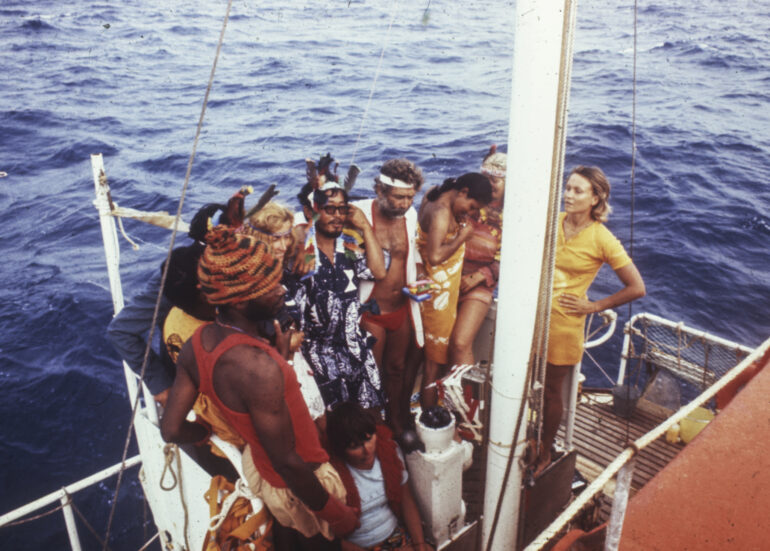 How difficult was it to find the former crew members and get them to agree on talking about their own experiences on the raft?
ML: It was quite difficult as I didn’t have their real names. Santiago had used pseudonyms in the research papers, so it took almost two years to find the seven surviving members. I knew that to make the film, I needed the participants as well as the footage of what happened on the raft.

That was another struggle. I knew there had been a 16mm camera onboard, but the material was nowhere to be found. I went through every Mexican TV archive to find it [the Acali Experiment was partly financed by Mexican television]. Then by pure luck, while I was at Santiago’s, I found a document about the Acali experiment, where Acali was wrongly spelt (with two ‘l’ instead of one). So I went back to one archive and asked them to look again in their files, and finally, we found the lost footage! It was like uncovering a hidden treasure! We had 8 hours of beautiful 16mm material. Then I knew that I could make the film.

How did the seven participants react when you approached them?
ML: Most of them were quite excited as this had been an amazing adventure in their lives. As most of them had not been able to keep in touch because of the language differences, they were thrilled to be reunited. But the Swedish captain, Maria, was quite hesitant. More than 40 years after the raft expedition, she was still upset as she had kept a bad memory from her fights with Santiago, and the press at the time had written a lot of dirt about the expedition, calling it a ‘Sex raft’ which wasn’t quite true. Yes, a few people had sex, but it was nowhere near the orgy described in the tabloid press. When the women returned ashore, they were shocked by the media coverage. This is why Maria was very sceptic. But I managed to convince her and the others by showing them The Regretters, so they understood what I wanted to do.

In the film, Santiago Genovés gradually loses control over his own experiment. He had ideals about having women in key positions, and preconceptions that violence and sexual relations would increase if the group was isolated and exposed to danger. But his macho nature and ‘psychological violence’ brought the group against him. Was he simply his worst enemy and the crew’s worse enemy, as he put their lives in danger?
ML: The expedition was indeed very dangerous as there were no security measures, but for Santiago, that was part of the experiment. He wanted the crew to feel in danger, to trigger in them feelings of conflict and aggression. To be honest, I think he was a bit confused about what he wanted to achieve. He was also a researcher, with a background in physical anthropology, rather than social psychology. Eventually he was criticised by his academic colleagues who questioned his double role as both an objective scientist and a participant in the experiment.

Santiago represented a certain generation of men, being this kind of macho intellectual figure who combined academic studies with adventure. He did want to be progressive, part of the feminist movement, but at the same time, he thrived for recognition from his peers.

Would you agree that Santiago Genovés was a forerunner of reality TV that exploded 20 years later?
ML: Absolutely. It’s impossible not to think of reality TV, and at the time, Mexican TV had part-financed the project. The idea was to do a kind of scientific documentary series about the experiment. When Santiago was interviewed later in his life, he was asked if he saw himself as a pioneer of reality TV. He didn’t like it as he saw himself as a serious scientist. I mean, he was genuinely interested in researching human behaviour and to bring peace by understanding the origin of violence. But he was also a poet. He wanted science to be more like art. More experimental and daring. Perhaps the Acali experiment would have been more successful as an artistic rather than a scientific venture.

The voice actor Daniel Giménez Cacho gives the right tone to the narrator. How was your collaboration with him and did he know of that experiment as Mexican citizen?
ML: Daniel Giménez Cacho is a fabulous actor who worked with directors like Pedro Almodóvar and Guillermo Del Toro. It turned out he had his own relationship with Santiago. In the 60s, Santiago had visited his school, and later in his life he had met him again. I wrote the script based on several of Santiago’s writings (the diary of the journey and some poetry) and Daniel recorded it in three different sessions.

Would you be interested in making a stage version of The Raft, and use the theme to transcend media forms, the way you did with The Regretters?
ML: The Regretters was both a play and a film, and the play is still touring around the world. I learned a lot from working with the same material in two different media. But with The Raft, I decided to do an interactive art installation instead, first at the Centre George Pompidou in Paris last year, and now together with CPH:DOX at Kunsthal Charlottenborg in Copenhagen. The installation consists of the full-size replica of the raft, and aboard, people can look at photos of the Acali experiment, video and listen to interviews with the participants. The original experiment was a lot about confinement, so I was interested in letting the audience experience that.

Do you have another documentary project lined up?
ML: The Regretters and The Raft are part of a studio documentary trilogy series, so there will be a third studio-set film. But I haven’t decided yet what it will be about. 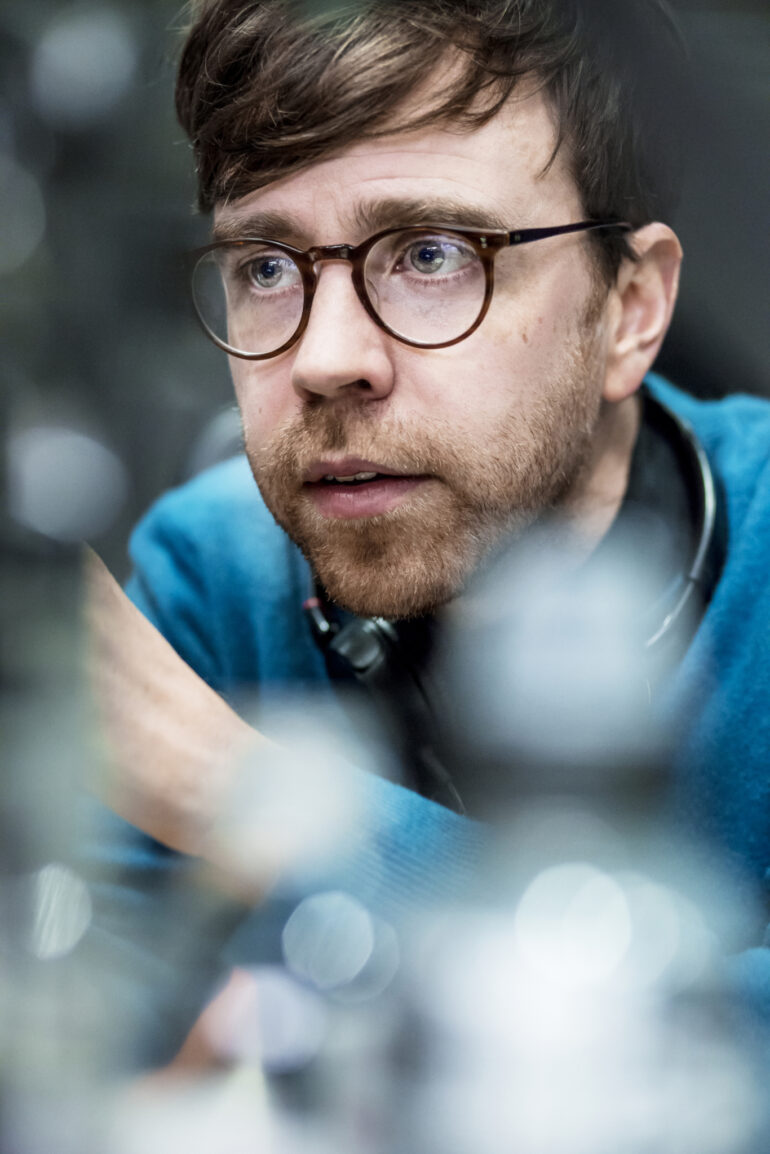