Incentives are key to achieve change

The brainstorming session September 24 on environmental sustainability in the Nordics was co-organised by the Finnish Film Affair and the Fund’s Audiovisual Collaboration 2021.

During the session and the networking event that followed, new pan-Nordic collaboration steps were discussed.

The inspirational session ‘Beyond Best Practices: What Should the Next Steps Be for a Sustainable Nordic Film and TV Industry’ was moderated by Finnish TV freelancer and ultimate green expert Anne Puolanne.

As such, she proudly cited at the session Finland’s pioneering all industry initiative to introduce the UK ‘albert’ carbon calculator tool and training programme (see story: CLICK HERE) as part of a larger sustainability strategy for Finnish film and TV productions by 2024.

“when aiming for a systematic change, Finland might be the furthest, but we need a systematic change in the Nordics too,” she said, pointing out at three key issues in the region: the lack of data, common carbon measurement tools, and the absence of a point-person or organisation, to oversee the green transition in the Nordic audiovisual industry.

Citing existing green audiovisual research papers and initiatives in the US and in Belgium, Puolanne said “we [in the Nordics] need to turn sustainability into a currency and prove that sustainability is smart”, she argued.

Mentioning specifically the European Commission’s paper ‘Greening the European Audiovisual Industry’ published in June 2021, she evaluated the cost of green transition in Europe at over €1.4 billion. “They [the EC] have done a research across six countries [France, Germany, Italy, Spain, Sweden, Czech Republic]. In the Nordics, we need to do a similar research every year or every other year,” suggested Puolanne.

In another recorded video presentation, Marina Blok, Head of Drama at Dutch pubcaster NTR, and Ellen Heemskerk, NTR producer, presented the ‘Green Filmmaking Project’ in the Netherlands, initiated a decade ago to create a more sustainable filming environment.

“Today we’re doing better, resistance [towards green transition] is fading, but there are still problems about motivation from the industry” linked to “time, money, hassle, communication challenges”, acknowledged Block, now in favour of a more obligatory approach. “Our method has been too non-committal”, she admitted.

Heemskerk felt the green transition process agreed in the EU, of emitting 49% less gas by 2030 “is going too slowly”. “We need enforcement, supervision, for example a system that works with bonuses, budget rebates for the whole drama and film industry. We expect that within a year,” she said, explaining that NTR is now working -similarly to Finland-with the albert carbon calculator and environmental tool kit, a group of local ambassadors and industry representatives to achieve bigger steps by 2022.

Explaining the EU’s sustainability policy, online panellist Lauriane Bertrand, Policy Officer at Creative Europe MEDIA said the Eu body’s strategy has been to federate the sustainability project and to use Creative Europe’s financial support to incentivise sustainable behaviour. “We need a common language and common methodology regarding carbon calculation and a sustainability label. We need to streamline our efforts, create synergies and bring people together,” she said. 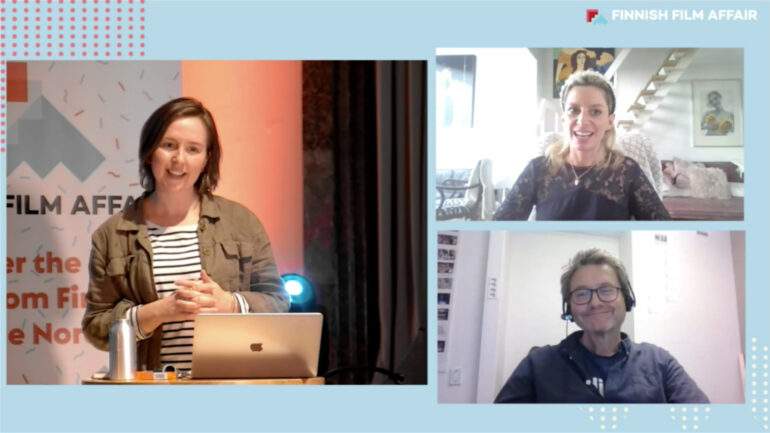 NORDICS
Invited to debate the situation in the Nordics, on-site panellist Anni Wessman, APFI Head of International, said data collection on carbon footprint of audiovisual works is the first urgent step to take. And to stimulate producers to act in a sustainable way, she suggested for each Nordic country with production incentives to add 5% on the existing 25% reimbursement costs. She also said that funders, should be the ones “weaving in sustainability in application conditions, not to make life more difficult for producers, but to incentivise them, and to make the [sustainability] bridge easier to cross.”

Online panellist Ivar Køhn, Head of Drama at NRK, concurred with Wessman. “We need help from Nordic broadcasters, financiers, politicians to go into the new green territory. If decision-makers make it mandatory for producers to be greener, then things will happen. Producers go for the money, so either they will have to do something for the money, or get more money if they produce green. Incentives are key to achieve change,” he said.

Køhn who explained that NRK has signed a deal with ‘albert’ two years ago, and will ask Norwegian producers to calculate their carbon footprint in 2022, added that acting green should start from idea stage, with all creatives -screenwriters, directors, producers- taking part in the sustainability discussions.

Mikael Svensson, Head of the Southern Sweden Film Commission and co-president of the European Film Commissions Network, felt that training, education in sustainability are quintessential, as well as gradual green strategy implementation, “not to frighten off producers”. He also supported the idea of introducing a green tag on audiovisual financing. “If you want to have the money, you have to follow the rules,” he said, arguing as well that foreign productions shooting in the Nordics should abide by the same green rules.

Asked which Nordic entity should be in charge of coordinating the sustainable efforts in the region and to keep the sustainable debate alive, Køhn and Wessman suggest Nordisk Film & TV Fond, while Svensson cited NEMA.

The Fund will collaborate with NEMA and other Nordic partners to decide on the possible next steps and action plan to implement. ”Our initiative Audiovisual Collaboration 2021 is about building bridges between the industry and decision-makers and creating dialogue. This will continue after 2021,” said Forsman.

The panel on sustainability in Helsinki was organised by the Fund’s Audiovisual Collaboration 2021, in collaboration with Finland’s Ministry of Education and Culture, under its presidency of the Nordic Council of Ministers. The topic directly refers to the Nordic Council’s ‘Vision 2030’ Action Plan for 2021-2024, to make the Nordics the most sustainable and integrated region in the world by 2030.