The interview was organised last week at C21 Content London by global distributor Beta Film, which teased potential buyers and journalists with selected clips from the Danish character-driven series. The series is in post-production and due to premiere in spring 2022 on TV2 Denmark.

Tagged as a ‘Nordic Light’, the series is created, written and co-directed by Oscar-nominated Scherfig (An Education, Their Finest, One Day, Italian for Beginners) and is her first Danish-language project in 14 years. It is quintessentially a Scherfig project, as a warm multi-faceted portrait of human beings from different backgrounds, sharing life-affirming experiences.

Here, the pulsating heart of the action and sole setting, is the maternity ward of a modern Copenhagen hospital, with the main characters belonging to the staff. Patients and their families, come in and out in each episode, having a child-or not, offering a broad depiction of the world around us, including the younger generation. “You follow these people over nine months and connect, identify with them in this hospital, one big stage from which we never cut away, filled with drama, emotions and even humour” explains Scherfig.

The seasoned filmmaker who also serves as executive producer, says her intention was to dive into the Danish health system and “pay tribute to those who work hard under intense circumstances”, while stripping the drama from the superfluous, and “sticking to the dense world of emotion and drama”.

One of the central characters is Ella (Sofie Gråbøl), head of the maternity ward. She works under intense pressure, delivering babies day in day out. She secretly wishes to have her own a child, but struggles to form a close relationship.

Among her colleagues is paediatrician Jerry (Pål Sverre Hagen of Valkyrien, Beforeigners), whose marriage is falling apart, a fact his religious community is not supposed to know.

As Scherfig explains, next to trained actors including as well Mattias Nordkvist (The Restaurant, White Wall), Sara Hjort Ditlevsen (Rita, Excuse Me) and Afshin Firouzi (Darkland), were real-life midwives, nurses and doctors. “It was surprising to see how different all are, when stripped of their [hospital] uniforms-one would have tattoos all over, another one would be a typical suburban housewife. They all are different, heroic, and the series captures that diversity,” says the showrunner.

Using the metaphor of a lotto machine, with balls rolling and unexpectedly stopping on a winning number, Scherfig says the maternity ward is filled with tension and unpredictability. “You have a soothing atmosphere on the surface, with people - always prepared - having to hide their stress and feelings.“ She compares the hospital to a military operation during wartime, where “the enemy can come from anywhere”, requiring extreme discipline, cool-headed focus.

Commenting on her role as Ella who struggles with work and personal issues, Gråbøl says playing characters only at work is particularly challenging as “there is no room for their personal life”…”Also, how do you portray characters when you’re all in the same setting, wearing the same clothes?” she quips. 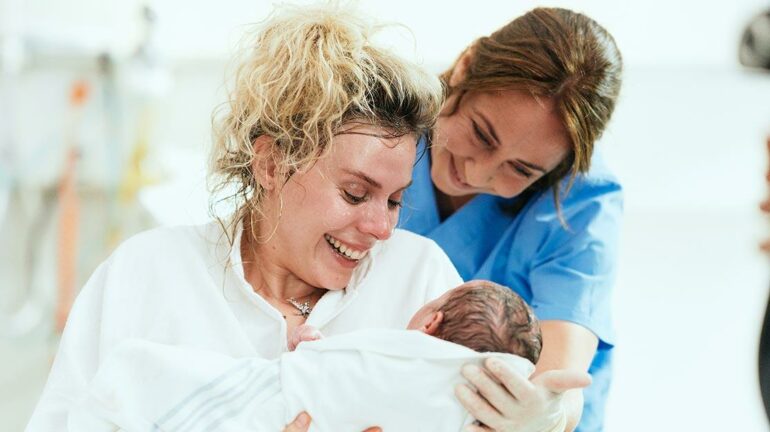 Asked how much research she did on midwifery, Gråbøl says she felt extremely privileged to have been accepted in a real maternity ward. “I had only been there twice for [the birth of] my own children. It’s very different to be there when you’re playing the lead - giving birth - and when you’re there, just observing. It’s a very closed world, and you have a sense of watching behind the scenes.”

The star of The Killing says she was extremely focused on capturing the working environment between the midwives, but being allowed to actually witness a real birth was “a huge experience and inspiration”. “When you play a birth scene, you can prepare to a certain point, watch videos on YouTube, speak to people, but when you have to act, it’s a lot about trusting your surroundings and letting go. “That live birth was an amazing experience that I took with me during the shooting process,” she says.

To make sure the show would be as authentic and true to reality as possible, the production team hired a midwife as consultant, who gave feedback on the scripts, tutored the actors playing midwives, and gave advice on how to hold a baby.

Asked if - as Dogme 95 founding member - she was tempted to apply a naturalistic Dogme style to the hospital setting, Scherfig first underscores that “her Dogme brother Ole Christian Madsen” is co-director, next to concept director Søren Balle and herself.

“With Dogme,” she goes on, “you learn to shoot fast, to consider obstacles, to trust actors in a different way, to control a bit less and to be less perfectionist, and I think that’s what I’ve taken with me. You just go out and see what the world brings you. But here, there isn’t a tea cup that’s not placed by someone. Everything is controlled and many conscious decisions have been made. That said, I’m glad if you can’t tell!” she laughs.

According to Scherfig, the series was shot in a purpose-built set, and all artificial daylight was “inspired by the Scandinavian long dawns and dusks and Christmas lights” to be as naturalistic as possible.

“The warm world made of close ups of skin, hands, arms, faces of children, contrasts with the abstract world of blue and white, sky and water, beautiful Scandinavian design,” adds the filmmaker.

Regarding her first experience as showrunner, Scherfig who was most recently episodic director on the US show The Astronaut Wives Club (2015) says: “It’s a lot of work and responsibility, but also fantastic to be able to use all aspects of filmmaking.“ She hopes that the production has benefitted from her long-time experience as writer and director.

Asked if it was important for her to return to filmmaking in her native language, Scherfig brushes away the language issue. The most important for her was to have the opportunity to collaborate with Sofie Gråbøl, and to focus on the Danish health system. “What drives me is an admiration and a gratitude towards these people [ in the health system],” she insists.

Gråbøl adds: “The job these people [midwives] do, their commitment is extraordinary. In Denmark, their work conditions are quite tough-I was shocked to discover that midwives are paid less than nurses, school teachers, although it’s hard to become a midwife.”

She goes on: “There are a lot of war movies, with heroic stories told over and over but to me, this story hasn’t been told and midwives’ stories definitely deserve to be told.”

Scherfig who was pleased to shoot the series relatively Covid free, says she is already developing a second season, which would focus on another ward in the same hospital.

Commenting on the series' launch at Content London, Anais de Neergaard, Beta Film’s VP International Sales & Acquisitions for the Benelux, Israel and Nordics said the series has received an "immensely positive response" from players around the world. "We are very excited about next year and are hoping for an international premiere of The Shift ahead of its national broadcast premiere on Denmark’s TV2," she said.