The Norwegian event movie The North Sea is hitting Norwegian screens Friday October 29 via Nordisk Film, after its world premiere at the Rome Film Festival.

After The Wave and its sequel The Quake that sold respectively 833,000 tickets in 2015 and 590,000 in 2018, the latest ‘Scandisaster ‘produced by Fantefilm is betting on the pulling power of the disaster genre on the silver screen and topic of oil digging in Norway that has defined the nation since the discovery of the original Ekofisk oil field in 1969.

Based on an original script by Harald Rosenløw (The King’s Choice, The Quake) and Lars Gudmestad (Headhunters, The Quake), the film takes the premise of a possible environmental disaster threatening Norway and Northern Europe due to decades of oil and gas drilling and pumping in the North Sea.

TrustNordisk has licensed it to more than 30 territories including the U.K. (Elysian Film Group), German-speaking territories (Koch Films) and France (Mediawan).

This is your second disaster movie: after The Quake. What do you find so thrilling about this genre?
John Andreas Andersen: In a way, disaster movies are sub-genres of action thrillers - genres that I love. You take the audience and your own characters into extraordinary situations, discuss what would I do, how would I feel in such circumstances, while just sitting in a cinema. That’s fascinating. Then being in Scandinavia, we can steal from the US and add a typical Scandi spin to the genre, with real characters, in flesh and blood, making real decisions - sometimes wrong, sometimes right. Definitely far from superheroes hanging under a rope in a helicopter. We put our characters in a Scandinavian reality.

Fantefilm has invented the word Scandisaster, which is anchored in reality, through storytelling, with the main character portrayed as an ordinary person - turned heroic through extraordinary circumstances, but also through the visual and technical aspects. Can you explain your choice of practical effects vs green screen and CGI technology?
JAA: What happened with this shoot is that the pandemic hit us and it forced us to take different filming solutions. We had originally decided to shoot half of the film in Norway, and half abroad, at a studio, but then we shot it fully in Norway. It ended up being a blessing for the film. We got access to a real oil platform, and tumbling around inside a real helicopter is different than being in a simulator. So all this played in favour of the realistic elements. It’s easier for actors to live their characters when they can smell the oil, taste the salty sea, feel the wind. It’s definitely better than being in front of a green screen.

How was your experience of shooting on an oil rig and how long where you on the rig?
JAA: It’s hard to get access to a real oil rig and then it’s a whole different ball game in terms of safety. Everyone on board has to take safety classes, and for a rig to welcome a crew of 50-60- people with three containers of equipment is a big thing. So it made it for a more difficult shoot but a better, more realistic film. We were there around two months, with helicopters flying us above the North Sea.

You’ve worked a long time as cinematographer before turning to directing, just a couple of years ago. That experience must have been handy, especially with such a large-scale movie…
JAA: Thanks to my background, I can relax regarding all the technical stuff as it’s been engraved in my body for over 20 years. That means I can focus on the work with the actors. But even as a cinematographer, I always felt that as a team, we’re all just pulling in the same direction to make a film together. I did miss at the time, the postproduction part and screenwriting part so I’m super happy to be part of filmmaking in the longer run.

Fantefilm’s producer Martin Sundland and in-house writers Harald Rosenløw Eeg & Lars Gudmestad form a very tight creative team. Did you all start thinking about The North Sea while making The Quake together?
JAA: We started working on this around the same time in 2018 when The Quake had premiered. The story was initiated by Lars and Harald. We met at regular times, discussed the script. It’s been a close collaboration between the four of us.

The backbone for the story is Norway’s exploitation of oil and gas in the North Sea that’s been going on for more than half a century, and the detrimental effect it can have on humans and nature itself. What are your personal views on the subject?
JAA: One of the underlining themes is that if you push nature too hard, it will get back at you. Yes, Norway has been an oil nation for the last 50 years, but for 2,000 years, we’ve been a sea nation, living off and using the Ocean. Getting to know the oil industry through research and seeing how life is on an oil rig really impressed me. I had a simple idea of what happens out there. It is one of the harshest environments on the planet, with extremely tough weather. But then, everything on the rig is technologically-advanced. Somehow after filming there, I got more optimistic about Norway. I think we will do good use of all the resource and technology that we have. 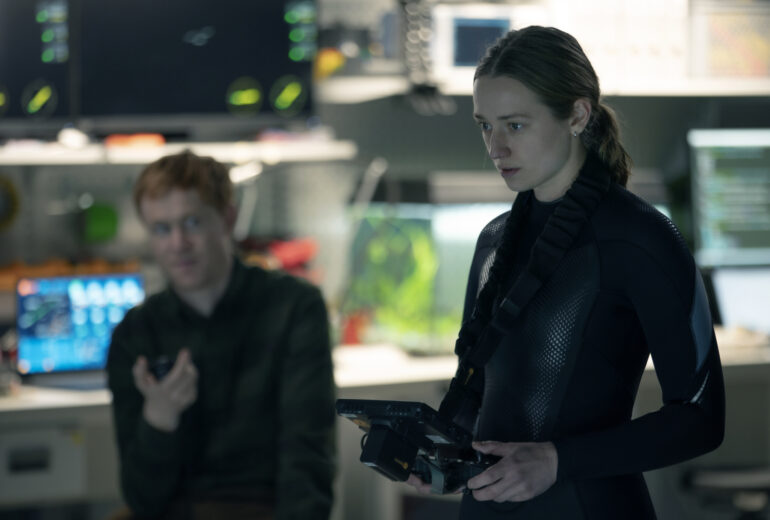 At a time when the world is focusing on COP26, your new centre-left government said: "Climate policy must not be moralising and must be fair”. What do you think of this take?
JAA: Our main purpose with the film is to give people a thrilling time in a theatre. But of course, if people can take home something extra, their own interpretation of the film, that’s just great.

Did you have Kristine Kujath Thorp in your mind from an early stage for the title role Sofia?
JAA: When we started casting, she hadn’t done too much. But we had heard about her and felt she was the perfect fit for the film and eventually built the rest of the cast around her. It’s an action film with a female action hero. Something you don’t see too much. I wanted to think of her as a person-not as a woman having male qualities that you’re used to seeing in action movies.

I also looked at older Norwegian movies-and realised that you often have scenes of women saying-what’s happening now?? I forbade all female actresses to ask that. But you do have men asking her what to do!

This is a true event movie, to be seen on a big screen. It must be crucial for you-as cinematographer/director, to deliver such an entertainment, at a time when people tend to watch content at home…
JAA: Absolutely. My love for film comes from going to the cinema. It’s been sad for a year and a half, having people just sitting on a couch watching films, series-whatever. We want people to get back to the cinema, not only for the big screen experience, but also as a social experience. This is the beauty of cinema. I hope the people will remember the address!

What’s next for you?
JAA: I’m doing for Fantefilm a WW2 movie called Convoy, written again by Harald [Rosenløw Eeg] and Lars [Gudmestad]. We’re in pre-production and will shoot in the spring 2022.