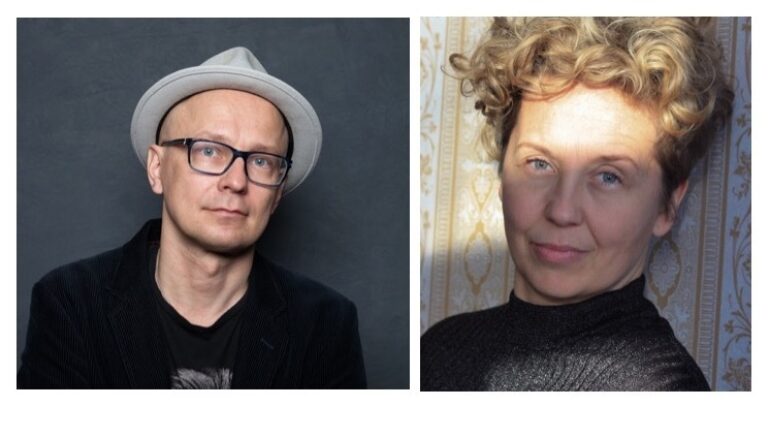 Second in our series of getting up close & personal with the co-writers of the Finnish TV series All the Sins (Kaikki synnit) nominated for the Nordisk Film & TV Prize 2019 to be awarded January 30 in Göteborg.

All the Sins produced by MRP Matila Röhr Productions Oy is a crime thriller about complex relationships and small-town prejudices, shot in the Oulu region.

After a ten-year absence, Detective Lauri Räihä (Heavy Trip’s Johannes Holopainen) is sent to investigate the murders of two men from the deeply religious Laestadian community in the small fictional northern town of Varjaka where he grew up. With his middle-aged colleague Sanna Tervo (Maria Sid), Lauri tries to solve the case, only to discover truths about himself, and his hometown.

Mika Ronkainen is a writer-director from Oulu who works with fiction, documentaries and theatre. He has directed several critically-acclaimed documentaries such as Screaming Men - best Nordic Documentary at Nordisk Panorama 2003, which screened at the Sundance Film Festival 2004, and Freetime Machos, shown at the Tribeca Film Festival 2010. Finnish Blood Swedish Heart won numerous awards including a Dragon Award for Best Documentary at Göteborg 2013. The same year he was selected among Variety’s Ten European Directors to Watch. All the Sins is his first TV drama.

Merja Aakko has worked 15 years as a journalist, specialised in human interest stories and social issues before entering the film and TV industries. “All the Sins” is her debut as TV drama screenwriter.

How did you get involved in All the Sins?
Mika Ronkainen: All the Sins is our original idea. We both come from the Bible Belt of Finland, a certain area in Northern Finland, where charismatic religious movements have always conquered. The religious sect which All the Sins is dealing with, Laestadionism, is a really big thing up there, the biggest one around our home town Oulu, and it affects your culture, no matter if you belong to it or not. So it felt like a very natural thing to write about.
Merja Akko: I was eager to try something new and became delighted when Mika asked if we could try to write a detective story with him. We started playing with an idea of rural religious community and our main characters, Lauri and Sanna. Finally, we ended up with the whole script of All the Sins.

As first-timer TV drama screenwriters, what did you find the most challenging and most exciting about it?
MR: The most exciting has been the writing of the script itself. In general, writing treatments is the hardest part for me. I do understand why they’re needed and I can do it, but for me it’s a bit like a painter, writing an essay in advance of what she or he is going to paint. Writing scenes is the most fun. That’s where the magic happens.
MA: We financed the writing ourselves and that's why I had to have another job. I almost went crazy but it seems it was worth it, after all. The funniest part has been working together, creating the characters, and writing the script itself.

How did you split the writing (dialogues, character/plot development etc)?
MR: We’ve worked together for five years now, but we've been friends since we were eleven years old. The way we work is pretty much based on our childhood friendship: we play just like we played when we were kids. We crack jokes, we tease each other, we challenge each other, we take roles. As a result, we have developed our own way of writing where we write as "one writer”.
MA: Our method has evolved naturally. We talk, joke and debate, sketching the next steps. Then we write – and talk while writing, too. With All the Sins, we first wrote the rough plot line of the whole series and then simply wrote the episode one.

What personal experience or vision did you bring to the screenplay?
MR: I think you have to bring a lot from yourself when you write. Own experiences, own emotions, things that have hurt you. If you don’t do that, you just end up copying stories and characters other people have already written before.
MA: All the Sins is fictional, but it is inspired by the villages in which we have lived in Northern Finland. For example the shame of sexuality is common in these conservative communities. There are events, problems, and feelings of my life in the series – but even more of the other people I have met. We did a lot of research for the story, and I found it an essential part of the creative process.

Relevance and authenticity are buzz words in TV drama. In what way do these words relate to All the Sins?
MR: Merja has a background in narrative journalism and I have been directing documentaries for fifteen years before moving into scripted drama. So, for both of us authenticity is important. With our background it’s more than natural to draw inspiration from real life.
MA: I find inspiration from true stories, real people, and social issues. The concept of "truth” is very relative, of course, but I think you can be more truthful and authentic in a TV series than in news. It is possible because the language of art is abstract and as such, the best tool to captures the truth.

What new elements do you bring to Nordic noir?
MR: We don’t think we’re doing Nordic noir. At least we don’t have the clichés of Nordic noir: dark colours, eroticised dead bodies of young women, and detectives who are huffing to each other without any particular reason.
MA: I would say that we are bringing love and warmth to Nordic Noir.

Generally speaking, what type of stories and genres make you tick?
MR: The good old character-driven drama works best for me. If characters are great, complex, and relatable, the genre does not really matter.
MA: I love the stories that combine different genres in a unique way, like adding comedy to crime, or historical drama to crime. The most important for me is when a story is peculiar but characters feel familiar.

Do you have any tip to other budding screenwriters, or an advice you received, that you found particularly useful?
MR: Never give up but do remember that sometimes it’s really wise to give up.
MA: If you feel a little bit ashamed when you're writing, it’s a good sign. That's when you’re probably hitting something significant.

Could you cite two TV dramas that you’ve binge watched recently.
MR: I stopped watching series when All the Sins went into production last spring. I can’t direct and watch stuff at the same time. I’d rather play piano on my spare time. It’s better for my brain. I’ve started to catch up now, though. I binged The Marvellous Mrs. Maisel and I loved it. Brilliant stuff.
MA: Babylon Berlin and Mad Men.

What are you currently working on? Do you have another TV drama lined up for 2019?
MR: We have some ideas for feature films too, but those are probably for later. It’s really an exciting time to be writing TV drama right now.
MA: We just finished a research trip to Guatemala for another series that we’re developing with All the Sins’ producer Ilkka Matila. And All the Sins season 2 is in development too.