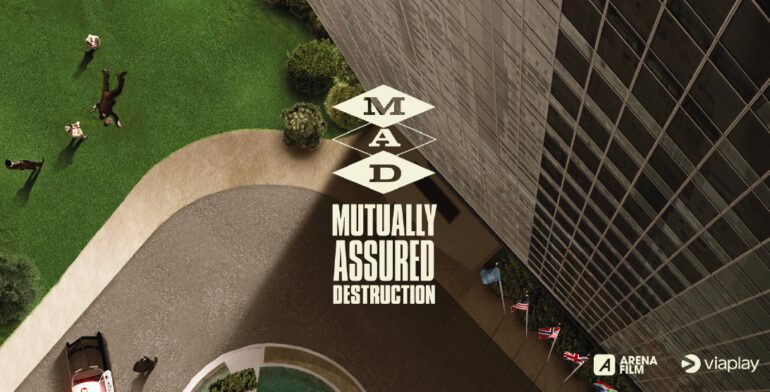 The three Nordic projects are among 16 international premium dramas (among 300 submissions) to be pitched at Paris Series Mania Co-Production Forum (April 18-21) to an audience of more than 500 international decision-makers.

Here under is the full detail of each Nordic project:

Story The spy thriller inspired by true events is set in the UN under Dag Hammarskjöld's leadership, between 1953-1959. When whistleblower and UN Danish diplomat Pov Bang-Jensen is found shot to death in mysterious circumstances (based on true events) in New York in 1959, dark truths emerge to haunt all sides in the delicate game of lies that kept the world from the brink of Mutually Assured Destruction (M.A.D.). This is the UN at the height of the Cold War. Natasha and Jason, two ‘absolute beginners’ in the world of international diplomacy, would make a perfect couple if they weren’t forced to spy on each other on behalf of competing superpowers...

About the project Bolt Jørgensen told nordicfilmandtvnews.com. “When I first read Bo Lidegaard’s book, I immediately thought this is a fantastic story for a TV drama and it fits perfectly our strategy at Arena Film, which is to elevate Scandinavian stories on the global market. “I met Michael Soussan [writer/journalist and former UN whistleblower] at a press conference in New York and we immediately hit the ground.“ “The series is based on the real story of the Danish diplomat Pov Bang-Jensen who saved many Hungarian lives after the Hungarian Revolution of 1956 as he refused to hand out the list of secret witnesses. The show will focus on Bang-Jensen’s work at the UN until his mysterious death in 1959. “We’ve been inspired by Alfred Hitchcock and the style of the AMC show Mad Men.

M.A.D. will be shot mostly in the English language and top international actors have already shown interest. Bolt Jørgensen will continue discussions with world distributors and potential co-producers at Series Mania.

Story The show is set in 1999, Moscow, the capital of the Wild East where money is the only law and the criminal underworld rules every aspect of daily life. An innocent trade plunges Swedish investment banker Tom Blixen into a battle between millionaires, oligarchs and their private armies. As enemies and killers reveal themselves one within another like a series of Babushka dolls, Tom has to rely on his wits to survive - running from dangers he can't even see, but also from something deeper: his own past, whose skeletons are just beginning to wake

About the project
Producer Piodor Gustafsson (The Snowman) acquired rights to the Moscow Noir book trilogy The Conductor from Saint Petersburg, The Merchant from Omsk and The Spy with No Country a year and a half ago. “Russia is so different from our world and these books take you right in the heart of the violence and chaos of the country at the turn of the 21st century”. “The 10-part series is based on the first book and hopefully the other two books will be adapted for television. The Conductor will be shot organically in Swedish, English and Russian. Aleksi Bardy [established Finnish producer and scriptwriter of Tom of Finland] will bring his unique expertise both as a producer and writer and will drive the project as showrunner.”

The high concept show is part of a first-look deal signed between Spark TV (co-headed by Gustafsson and Swedish director Tomas Alfredson) and French mini-major Studiocanal to co-develop TV series both in English and Swedish languages. Gustafsson will be looking at closing the remaining 50% of the high end budget at Series Mania.

Story Erik and Adam are identical twin brothers, living completely different lives. Erik is a broke surfer bum and Adam, a successful family man and businessman. When Erik seeks out his brother for the first time in 15 years, a quarrel ends with Erik and Adam’s wife, Ingrid, accidentally killing Adam. To avoid getting arrested for murder and to save his brother’s family, Erik takes over Adam's identity. It soon turns out that the biggest challenge is not getting caught – it’s pretending to be someone you’re not.

About the project Kristoffer Metcalfe (director of Cupid’s Balls) came up with the original idea, together with star actor Kristofer Hivju (Game of Thrones, Force Majeure) who will play the twin brothers. Most of the shooting on location will take place in the Lofoten archipelago in northern Norway. Producer Sigurd Mikal Karoliussen said he hopes to close the remaining 50% of the €6m budget at Series Mania.