The romantic epic film is a modern version of the 1973 Czech/German classic film, set in the Norwegian’s Arctic winter and wild landscape.

Under the pen of seasoned screenwriters Kamilla Krogsveen, Karsten Fullu, Anna Bache-Wiig and Siv Rajendram Eliassen, Cinderella is a charismatic young woman, close to nature, who learns to break free from her tyrannical stepmother and to believe in herself and the power of love.

Next to pop singer Astrid Smeplass (known as Astrid S) who makes a convincing screen debut as Cinderella, are Cengiz Al as the prince, Ellen Dorrit Petersen (The Innocents) as the evil stepmother, Ingrid Giæver (Thelma) as her stepsister, Thorbjørn Harr (Vikings, 22 July) as the king and Nasrin Khusrawi (Exit, Occupied) as the queen.

How did the project land on your desk? Were you thrilled or a bit sceptical at the beginning about doing yet another take of Cinderella?
Cecilie Mosli: Yes I was hesitant at the beginning. But then when the producers said that in their version, Cinderella didn’t want to marry, I felt-OK, this is interesting!

The 1973 Czech version of the Cinderella fairy tale is an all-time classic in Norway, the Czech republic and Germany. But how did you -and the co-writers - give it a contemporary feel, to make sure the film would appeal to today’s young audience?
CM: I’m glad you’re asking this, because the scriptwriting took many years. Cinderella is a beautiful fairy tale, but there are many elements in it that we could play with. We wanted to renew the story, make it relevant to today’s young generation and as inclusive as possible, so that kids of all colours, gender and social background could see themselves in it, while keeping the core fairy tale. I have teenage kids, very ‘woke’, and they helped me a lot to make the story as engaging as possible to today’s younger audience.

What are the core themes that you wanted the film to carry?
CM: It’s about nature, feminism, class conflict, breaking free, fulfilling a dream. And most of all, being yourself is enough. Then of course, a key element was the arctic setting. I grew up in Northern Norway and was thrilled to dive into this breath-taking landscape.

The film is indeed a hymn to Norway’s natural beauties and it cleverly combines the magical with medieval elements and Norwegian tradition. How did you come up with this?
CM: The producers and I didn’t want to do just another remake to sell tickets. We all wanted to make an inspiring, beautifully crafted arctic set-movie, as eco-friendly and sustainable as possible. Therefore everything in the film comes from natural material, every costume uses wool, cotton; there is no plastic in the film. We also had a glass blower from Northern Norway to create icicles.

Regarding the setting, initially, we were supposed to shoot a large part of the movie in Lithuania, but then because of Covid, we relocated to Norway. We filmed three weeks in a national park in Eastern Norway, then the farm sequences were shot at the Lillehammer Museum Foundation. We did film the castle scenes in Lithuania as we have no medieval castles in Norway. 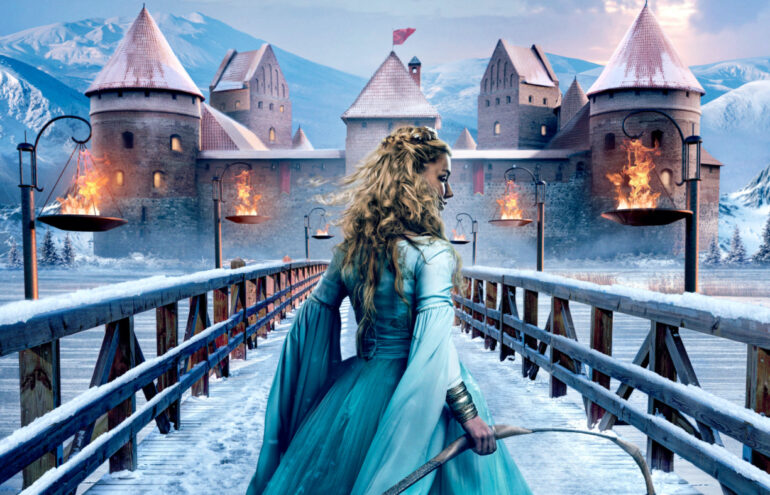 How did you create this universe with your key heads of department? Did you have a storyboard?
CM: That was just for the action scenes, and some of the scenes with animals. The production designer Siri Langdalen [Monster, Snowfall] is one of the most experienced in Norway. She had a lot of knowledge about Norwegian medieval times. She understood what I wanted and reacted fast to the arctic theme.

Then our French Lithuanian-based costume designer Flore Vauville [Versailles] was sensitive to Norwegian authentic materials and traditions. We also used second hand furs-not to kill any animal. Siri, Flore and I had a wonderful collaboration, using our knowledge to blend the Norwegian traditions into the fantasy universe.

Ellen Dorrit Petersen’s transformation into the villain is truly impressive…
CM: Yes. We had an amazing visionary Icelandic make-up designer Asta Hafthorsdottir (Beforeigners, Home for Christmas, Norsemen]. She hates repeating herself. We also agreed to make Cinderella quite natural, with small realistic elements to expand everything on her.

How challenging was it physically to film mostly snowy scenes in the open air?
CM: It was tough. We had no trailers for the actors, we created tracks for the horses, for the cameras, but everything blew away. Then it was dark early. The first weeks were both fun and super challenging. We were up in the mountain 12-13 hours a day, which was physically demanding, but the fresh air was also invigorating.

How did you get the idea to cast Astrid S, in her first screen appearance?
CM: I knew Cinderella had to be charismatic. We wanted an actor who would be in her early 20s, but it’s not easy to have experienced actors of that age. One day I just looked at a pop programme on TV, where Astrid S was asked to dress up and pretend to be someone else. She was so funny and playful. I said…oh my God-I have to do a screen test with her. I have a good experience as well as teacher at the National Academy of Acting, so I knew how to test her. She responded so well to everything. It was clear she had to play the part. But then, it wasn’t easy to adjust our schedules as she is very busy with her singing career. Ultimately, she was super happy and thrilled to play Cinderella.

Weren’t you tempted to make her sing?
CM: For me it was important to separate Astrid the actress to the specific image she has as a pop star. I know it’s good for PR and she has several thousands followers on social media, but for me, she was just perfect for the role. That said, she does sing at the end credits.

Was Cengiz Al an early option to play the Prince?
CM: I had quite a few strong candidates for the Prince. When he came into our room during casting, it felt evident. Also, the chemistry between him and Astrid was just right. Now they are best friends.

Who worked on the SFX and VFX?
CM: We used Storm Studios. We were lucky that a major US project was postponed because of Covid, so we could work with them in-house, as they produced the film. I can’t believe how good and ambitious they are! The Northern lights for instance were shot in northern Norway, then integrated beautifully into the film. I told the head of VFX: I feel I’m having a Christmas calendar, a new gift every day! They were also with us on set, supervising the magic scenes with the three nuts.

What did you enjoy most about working on your first feature film as a director?
CM: I loved having time to focus on quality and adjust every smallest detail to make the film better. It’s like writing a poem instead of a novel, working on every little word. The producers would always tell me-if that’s your vision and what it will take to make the film better, then let’s do it. It was a luxury. I am super proud of the end result and looking forward to showing the film to the audience.

You’ve directed major TV shows such as Mammon, Home Ground, Thin Ice. How do you feel about the boom in TV drama?
CM: I was fortunate to work in TV drama when it took off in Norway. I love the long-form format, that allows characters to develop, complex stories to unfold. I feel lucky to work both in film and TV drama.

What will you do next?
CM: I’m in pre-production of a TV drama that will start shooting in January but I can’t say more!