Exclusive: Swedish founder, producer and co-owner of ATMO with Saleh, has been at his side since 1996 and together they have reached Cannes’ main competition.

Saleh will be joining the privileged club of Palme d’or nominees this year withBoy from Heaven, his second feature set in Egypt after The Nile Hilton Incident which won Sundance’s Grand Jury Prize: World Cinema Dramatic in 2017.

Åberg who produced the film with Fredrik Zander, tells us about her long-time collaboration with the Swedish writer/director.

How and when did you first meet Tarik Saleh?
Kristina Åberg: We first met in 1996. We both worked at SVT on a current affairs programme called ‘Elbyl’. It was cutting edge, very creative. We found each other as we shared so many points of interests, notably the Middle East, that I had covered as a news reporter. Together with a group of journalists and filmmakers from Elbyl, including Tarik and Erik Gandini [Videocracy, The Rebel Surgeon], we then decided to set up our own production company Atmo in 2000, also with Lars Rodvaldr.

I took the initiative to start Atmo as, I had become a mother and felt I couldn’t continue to travel to hot spots around the world. I also wanted to have more power and freedom in my working life.

Tarik at the beginning didn’t want to be co-owner-it was too ‘capitalistic’ for him, but then I convinced him. Today he values the fact that he is shareholder and full-time employee. We are now three owners at Atmo-Tarik, Lars and myself.

The early days at Atmo must have been exciting and stimulating times for you and Tarik…
KÅ: Yes we were used to working internationally and shared the same passion for world politics. We started by making programmes, mainly for SVT, but then expanded into documentaries for the international market. Together with Erik [Gandini], Tarik did the TV documentary Sacrificio: Who Betrayed Che Guevara which was a huge success, then Gitmo [about the Guantanamo Bay detention camp].

Our motto at Atmo was to create works that we were proud of. With Gitmo, with felt we could do better than ‘just’ a TV doc and looked for extra financing. We contacted Zentropa and they became our co-producers. That was our first full-length documentary for the cinema. We all said we went to film school at Zentropa, as we learnt a lot from them. Tarik’s first fiction length film-Metropia [opener of Venice’s Critics’ Week 2009] was also co-produced by Zentropa.

The animated sci-fi Metropia was immediately highly ambitious, both in its narrative and with a ground-breaking hyper realistic visual style…
KÅ: We’ve always had high ambitions. When I asked Tarik who do you want for the main voices he said: Juliette Lewis and Vincent Gallo. I said OK and reached out to them directly. Based on our promo-reel, which they loved, they both came on board.

How would you define Tarik’s filmmaking style?
KÅ: Tarik grew up watching his father who was an animator. That triggered his interest in film from an early age. He started as a graffiti artist, became a big name in Sweden, and worked afterwards as a publisher and journalist in Egypt. Today his style is very much influenced by the real world and documentary filmmaking. Authenticity is key for him.

He also seems to have found his niche in crime and thrillers. All his feature films -Metropia, Tommy, The Nile Hilton Incident, Boy from Heaven - even his US produced The Contractor - are in those genres…
KÅ: Yes it’s true. I always say that he tends to go back to the same story - David versus Goliath - but through different angles and shapes.

What type of a writer is he?
KÅ: He is a great writer. The Nile Hilton Incident and Boy from Heaven are quite unique when it comes to both storytelling and setting. As Tarik's father is from Egypt, he has a deep knowledge about Egyptian culture and society. Tarik had almost a ready script before we applied for development money for Boy from Heaven.

We then teamed up with Bufo in Finland and Final Cut for Real in Denmark. There’s a great dynamic that occurs between the producer’s financial and strategical goals for a film in co-existence with the director’s endeavour to push artistic boundaries. On the creative side, Tarik brought in his regular collaborators, French cinematographer Pierre Aïm, Danish editor Theis Schmidt, and Swedish production designer Roger Rosenberg.

The Nile Hilton Incident was the first Arab-language film about Egypt that Tarik directed, followed by Boy from Heaven. He has more stories to be told from that particular culture and universe.

These films perfectly illustrate the way Swedish cinema is evolving, widening its perspective and looking outward. The Swedish Film Institute understands this, but not all public funders do, which is regrettable. We live in a multicultural society and the diversity in Swedish society is what makes it so much more interesting and successful, across all art forms. 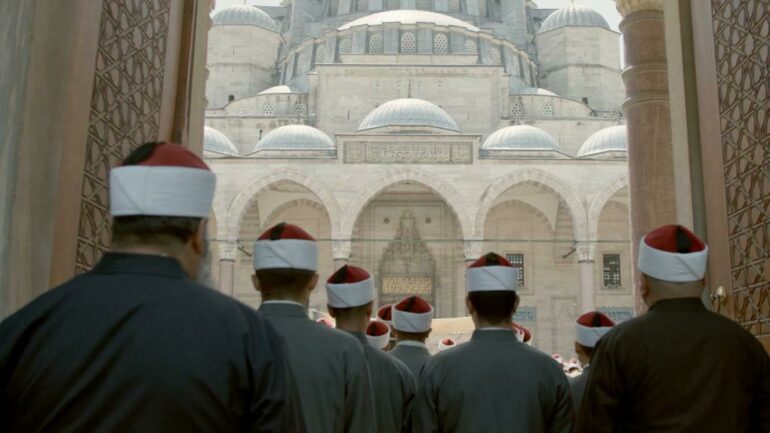 Regarding Boy from Heaven, what were the biggest challenges and where was it shot?
KÅ: Covid was the biggest challenge which forced us to postpone the film by a year. We shot it last summer, mostly in Istanbul, at the Süleymaniye Mosque and its surroundings. We were lucky that we could film a lot outdoors and that Turkey had a good vaccination programme.

Looking ahead, how would you like to expand Atmo? Would you be willing to produce for global streamers?
KÅ: Absolutely. We could have chosen to go with a streamer with Boy from Heaven, but decided to raise the money through the traditional public funding way, with European co-producers. We wanted a nice theatrical release in many countries and of course to be in Cannes!