The event Norwegian TV show is launching October 25 on NRK. We spoke to writer/director Alexander Eik.

The main challenge was to imagine what went on behind closed doors.

The lavish Norwegian drama series Atlantic Crossing starring Sofia Helin, Kyle MacLachlan and Tobias Santelmann, is finally arriving at its home destination on NRK, after a global launch in competition at Canneseries.

Inspired by true events, the TV show sheds a new light on Norwegian Crown Princess Märtha who fled from Nazi occupation during WW2 to become an influential figure in world politics.

Living at the White House with her children, she developed a close relationship with President Franklin D. Roosevelt and convinced him to support Norway and Europe, at a time when the American public was against the US joining the war.

The eight-part TV show written by Eik with Linda May Kallestein for Cinenord was co-produced by Beta Film, DR, SVT, with support among others from Nordisk Film & TV Fond. Beta Film licensed the series to 30 territories including the US (PBS Masterpiece), Italy (Rai), Germany/Austria (Deutsche Telekom’s Magenta TV). It will also air on Yle and RÚV.

The close relationship between Franklin D. Roosevelt and Crown Princess Märtha is really something few people know about. How and when did you find out about it?
Alexander Eik: It started back in 2011. I read an article in a Norwegian newspaper speculating around the supposedly romantic relationship between Crown Princess Märtha and president Roosevelt during WW2. It felt almost too incredible to be true. So I started digging for more information, and this fascinating story surfaced from the research, with a scope that went far beyond my wildest expectations, because the choices these individuals made at the time, affected the entire world. I realised as a storyteller that I had struck gold.

My co-writer Linda May Kallestein and I did our best to achieve historical credibility. We found plenty of sources confirming that Roosevelt was infatuated with Märtha, and some sources even claimed he was madly in love with her.

The research must have been overwhelming. What were your main sources, and how much support did you get from the main protagonists' relatives and descendants?
AE: The Royal family wasn’t involved at all. As storytellers, we needed the necessary distance to the material to be free of any agenda that could interfere with the story. But we did speak to many first-hand sources, survivors and relatives of people who were close to the events. For instance, we met two of FDR and Eleanor Roosevelt’s grandchildren. They had vivid memories of playing with the Norwegian royal children when they were kids and confirmed that the two families spent a lot of time together.

What were the main challenges on a narrative standpoint? Navigating between historical facts and fiction? Trying to make the character credible and engaging to today's viewers?
AE: Writing fictional drama inspired by true events is always a delicate balancing act between staying true to history and at the same time creating a compelling dramatisation, and, not least, remaining respectful to the subjects, many of whom are still alive today.

The main challenge was to imagine what went on behind closed doors. Also, it was hard to get a sense of who Märtha was as a person behind the royal façade. Mostly, in history books, she is only mentioned briefly as a side character. We had to approach the writing process as detectives, combining gold digging and laying out a big puzzle. 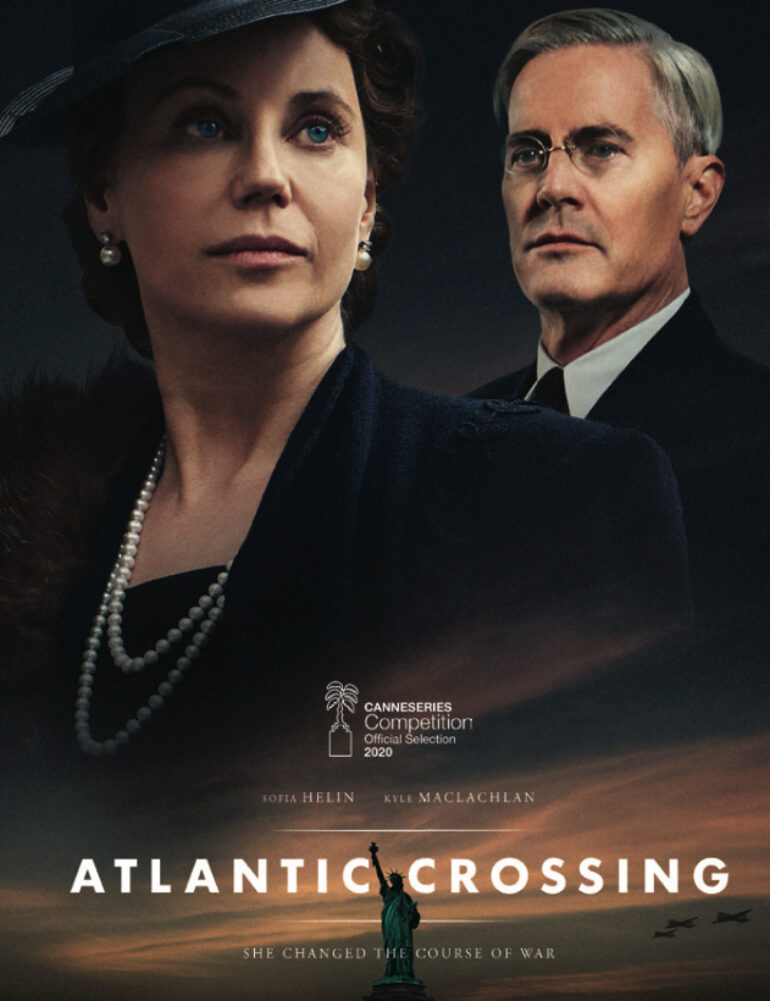 Was Crown Princess Märtha an unsung heroine who deserved her right place in history?
AE: She was very private and didn’t thrive in the spotlight, which made her appear almost like a mythical and mystical figure. She died a few years after the war, and never became queen, so I believe she had largely been forgotten, even in Norway. But now, our story is an opportunity for new generations to get to know her. Her story suddenly became a part of world history when she moved into the White House and was able to influence Roosevelt.

It’s also a rare opportunity to focus on Franklin D Roosevelt who hasn’t been portrayed much in fiction works, unlike Churchill for instance…
AE: Roosevelt is one of the greatest American presidents, alongside Abraham Lincoln and George Washington. It’s important to remind people what the American presidency used to represent, and its influence in world politics.

Having Sofia Helin on board, and of course, Kyle MacLachlan must have been crucial to give weight to the project both creatively and financially. How was it to work with them?
AE: Sofia Helin was my first choice. I’m a big fan of The Bridge, although Saga Norén; the character Helin plays in that series, is probably the diametrical opposite of Crown Princess Märtha. But watching an interview with Sofia, her charisma and personal warmth struck me. Märtha’s empathy and ability to recognize other human beings, regardless of their status, were the core human qualities I was looking for in an actor. So, I was thrilled when Sofia accepted the part, a full year before shooting started. She did her research, and even learned to speak Norwegian. I was very impressed by her stamina, and her ability to switch between Swedish, Norwegian and English. She is a true character-actress.

Regarding the actor who would play Roosevelt, I had no clue who to approach. Luckily, the top US casting agent Avy Kaufman came on board. She told us we could trust the quality of the script and aim high. We approached Kyle and were thrilled when he accepted the role. 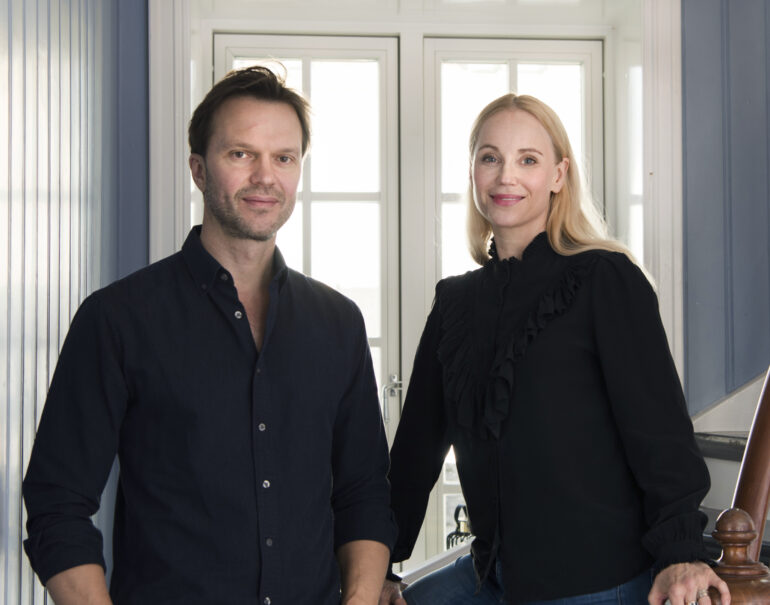 This is your biggest ever project as a director. It must have been quite a mountain to climb and learning curve…
AE: It was a daunting task. I made sure we had the best people on board, who had worked on similar projects. We did all studio work and a lot of interiors in the Czech Republic and the rest in Norway. This production is also big on VFX, and we had like 600 VFX shots, plus 5,000 extras, all dressed up in period costumes. It was a formidable task....

How was your collaboration with some of the Nordic region’s top behind the scene people, like DOP Carl Sundberg (The Bridge, Modus), production designer Jette Lehmann (Melancholia, Flame & Citron), costume designer Karen Fabritius Gram (State of Happiness)?
AE: Regarding Carl Sundberg, I felt he had a deep understanding of storytelling and could give me vital input on the script. He has a strong intellect and personality. Jette Lehmann was an obvious choice. Few production designers in Scandinavia have worked at the highest level like her and she had experienced in working in the Czech Republic. Karen Fabritius Gram was also an obvious choice here in Norway, due to her previous experience with WWII dramas. She had already done the research on the period which probably saved us 3-4 months.

Was it hard to stay on budget? AE: I was involved in the budgeting to make sure we were spending the money in the right places, and we did come in on budget. To save money and not exceed our 130 shooting-day plan, we decided to have a second director [Janic Heen] who could supervise a splinter unit. So, for several periods of the shoot, we had two sets running, with the same base camp, on the same day. It was quite a puzzle to make it work.

What do you hope viewers will take away from watching the show?
AE: I hope the wider audience will experience the series as an inspiring universal story of awakening. The characters are iconic, but we will see them like never before, as human beings. It’s also chilling to see how the pre-war era resonates with current events, how the US public at the time was advocating isolationism, how the world was influenced by totalitarianism, with a growing public discontent, economic decline, political polarisation etc. All this makes Atlantic Crossing sadly relevant.

What’s next?
AE: At Cinenord we’re filming Wisting season 2, which I am a bit involved with as executive producer. But as a writer-director I hope to get the opportunity to do a fully English language show, for an international audience.